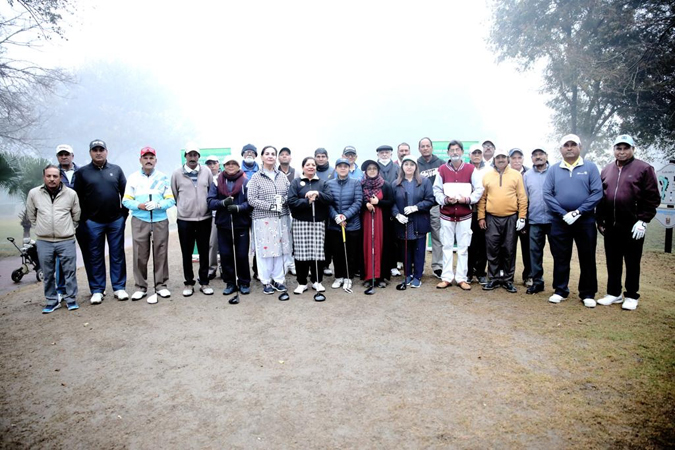 LAHORE: The 13th Syed Manzoor Hussain Memorial Invitational Golf for amateurs, women and senior professionals (above 55 years age) was fostered and enterprisingly activated at the par 72, Lahore Gymkhana Golf Course here on Wednesday. Conducted and veraciously scheduled by his righteous and upright son Syed Shaghil Hussian, this ardent and committed descendant of the Syed Manzoor Hussain family flew over to his hereditary home town from United States to hold this esteemed golf championship. In the process, he honoured his virtuous father Manzoor Hussain who played golf at Lahore Gymkhana for fifty years and also triggered competitive golf for senior professionals, consummate amateurs and motivated women of Lahore in a confrontation of golf playing skills. And after 18 holes of stroke play, the contest of golfing skills produced pocket boosting cash rewards for the top performing senior professionals and worthwhile mementos for formidable ones of the amateur category and the women’s segment.

In the race for supremacy in the senior professional section, the engaging professionals involved a sizeable number of former golf champions who still yearn for an opportunity to benefit through an exceptional display of golfing expertise. And on the occasion, former daunting ones like Ghulam Nabi, six times winner of Pakistan Open, M Shafiq, a dominant golf champion of the eighties, Akber Ali, Punjab Open title holder for many years, and M Ilyas were all there hoping to replicate their animated touch and trounce their adversaries. All through the 18 holes, visible was their struggle to rise above the ordinary

The superb and stirring one in this Memorial Golf turned out to be Manzoor Ahmed, a retired one of Punjab Police and Pakistan Open champion way back in 1991, who still retains a youthful physique. Manzoor played remarkably well to bring in a score of gross 68, four under par. Throughout the 18 holes, he consistently produced shots of high quality and complemented this by putting with mastery touch. His outstanding score was achieved through 15 regulation pars two birdies and a hole in one and did not fall prey to errant shot making. By virtue of this performance, he was awarded the Syed Manzoor Hussain Trophy and a cash prize of Rs 100,000. This certainly was a fortunate day for him as he came up with a hole in one on the par 3, 12th hole, for which he also awarded with a cash prize of Rs 50,000. The runner-up in the senior professionals category were two competitors: Asghar Ali and M Akram. They pursued victory by playing dependably and their score of par 72 represented an impressive effort. The leading one in the competition for amateurs turned out to be Ahmed Zafar Hayat. His score over 18 holes was gross 74. The runner-up gross was Mohsin Zafar and his score was gross 78. The net section winner was Atif Butt while the second net winner was Ghaffar Ahmad. In the amateur category, longest drive was hit by Mohsin Zafar and nearest to the pin by Ahmed Zafar Hayat. The women’s competition was dominated by Tehmina Ahmed. She won the first gross. The runner-up gross was Sameea Javed Ali. Minaa Zainab was first net and Sobia won second net. Longest drive was hit by Tehmina Ahmed and she was also winner of nearest to the pin prize. The veteran category winner was Shaukat Ali. The runner-up prize was shared between Akbar Ali and Iftikhar Ahmed .