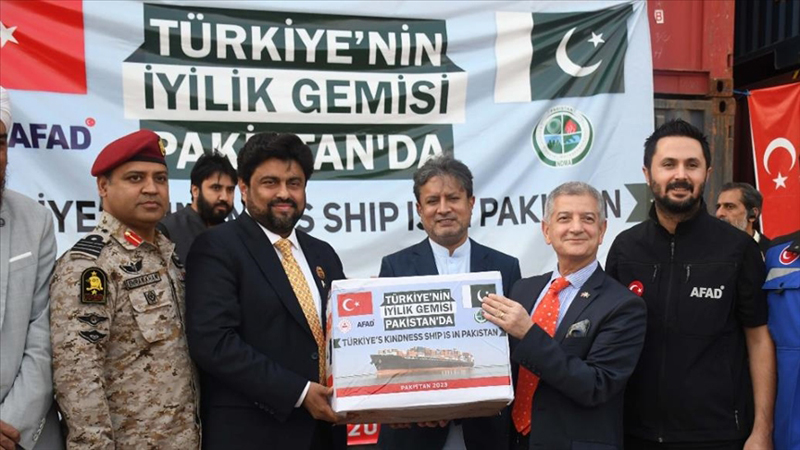 Türkiye on Wednesday handed over another batch of relief goods for Pakistan’s flood victims at a ceremony in Karachi. Nearly 900 tons of relief goods, including food and kitchen items, blankets, warm clothes, cleaning material, and mattresses, were brought by a Turkish ship that anchored at Karachi port. Turkish Consul General in Karachi, Cemal Sangu, on behalf of the Türkiye’s Disaster and Emergency Management Authority (AFAD), handed over the relief items to the governor of southern Sindh province, Kamran Tessori.

Speaking at the ceremony, Sangu said that another vessel carrying 900 tons of relief items will arrive in Karachi on Feb. 4. “We want to tell the flood victims that you are not alone at this trying time. The people of Türkiye are with you,” Sangu said. Tessori, in his remarks, thanked Ankara for its “consistent” support to the flood victims across the country.

The two countries, he observed, share a similar view on regional and global issues, and have stood beside each other in testing times. AFAD Provincial Director Ibrahim Avsar, and Karachi representative of the Turkish Cooperation and Coordination Agency (TIKA), Khalil Ibrahim Basaran, also attended the ceremony. Torrential rains and unprecedented floods brought a third of this South Asian nuclear country under water in September last, affecting some 33 million people, and washing away hundreds of thousands of animals, houses, bridges, schools, hospitals, and other infrastructures.

The near-apocalyptic floods also killed over 1,700 people, in addition to causing a whopping loss of 30 billion dollars to the country’s already sputtering economy. So far, Ankara has sent 15 planes and 13 “goodness trains” loaded with relief goods, including tents, food, medicine, kitchen items, vaccine, and other supplies to the flood-hit regions. AFAD also provided more than 30,000 tents in 19 regions, providing temporary housing to 200,000 displaced people. The Turkish charity also set up three tent cities in Jamshoro, Dadu and Noshehro Feroz districts of Sindh – the regions hit hard by rains and floods.