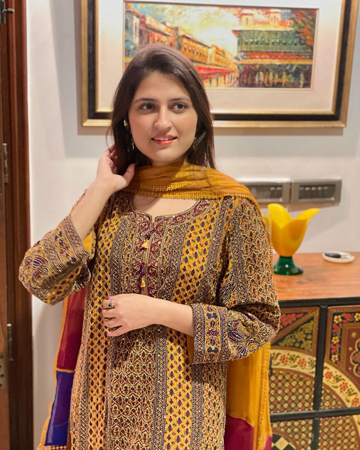 The latest video of actor Tanya Hussain is going viral on social media. The viral video on the visual-sharing application Instagram showed the ‘Muqaddar Ka Sitara’ actor flaunting her dashing looks while a song played over it.

She wrote the character’s name from the serial Ramsha as the character. The elegant clip got heart-warming reactions from the application’s users. They used heart emojis to compliment the video and her looks. Tanya Hussain, who won hearts with her portrayal of Anum in ARY Digital’s ‘Betiyaan,’ returned as Ramsha in the ongoing serial, which is about the societal issue of treating marriages as the cure for irresponsible upbringings.

She plays an entirely different character in the play starring Arez Ahmed and Fatima Effendi. Her plans to get closer to Faizan for his money and wealth become successful.

In an Instagram post, she said that her character is very different from others she has ever played.

The celebrity has millions of admirers on the visual-sharing platform. She shares pictures and videos of her personal and professional happenings on it. Earlier, Tanya Hussain shared a clip of her from the sets of the drama ‘Betiyaan.’ The video became a hit and got thousands of views and heart-warming comments from her admirers and fans.