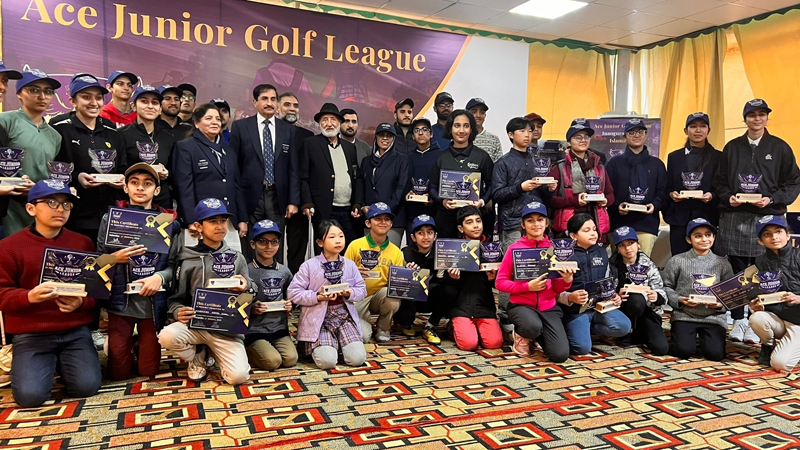 Despite predictions of heavy rainfall, 60 passionate young boys and girls, aged between 5 and 18 years, ignored the weather forecast and participated with full enthusiasm. Their commendable dedication speaks volumes for the future of golf in Pakistan. Credit for infusing this spirit amongst our junior golfers at the grassroots level, must be given, unreservidly, to the remarkable team comprising its Founder – President Munazza Shaheen and its hands – on Patron Dr Asma Afzal Shami. Working under the patronage and support of its Paron – in – Chief, Lt Gen (Retd) Mian Muhammad Hilal Hussain, the former President of PGF, they have jointly achieved an unbelievable level of success in putting Project AJGL on such sound foundations in the short span of 3 months.

It may be recalled that the AJGL first appeared on Pakistan’s ‘Golfing Landscape’ when almost a 100, under 18, Junior Golfers participated in its Inaugural Match held on 1-2 October 2022 at the Lahore Garrison Greens. The aim of AJGL is to act as a nursery for discovering, nurturing and producing our Nation’s future golf champions. It is worth mentioning that Munazza, its President, is the only Pakistani to earn a distinction while qualifying as a Level 2 Referee from a foreign establishment and has the honour of being the Chief Referee of the 5th PGF International Ladies Golf Championship held in 2022 in Islamabad. After studying the Junior Golf Leagues of USA, Malasia and Thailand, she has set two basic operating principles for her AJGL, ie firstly, dividing all golfers into age based categories and, secondly, making them compete on the basis of gross scores only. She also wants to help develop their golfing potential via a combination of three related aspects, ie skill building by professional coaching, mental preparation through golf psychology and arranging frequent competions for honing their competitive spirit and developing their ability to withstand match pressure.

In the 2nd AJGL Match, junior golfers from Islamabad, Rawalpindi, Peshawar and Lahore participated in four age based categories. In Girls Birdie Category (4-10 years) Zoha Zeehan won 1st position, Aleena Khan got second and our little Korean player Taehui Kang won 3rd prize. Among Birdie Boys, Zalmay Amin from Peshawar won first position while Abdaal Khan was 2nd and Fazeel Ahmed 3rd. Prizes to this Category were given by Mrs Yasmin Mubarik who has the distinction of winning the National Championship four times. In Girls Eagle Category (10 to 14 years) 1st position was secured by Ramin Amin from Peshawar, while Amna Malik and Sara Amin were 2nd and 3rd respectivly. Among Eagle Boys, Shahmir Ahmed was 1st, Musa Khan got 2nd and Wajahat Anwer got the 3rd prize. Prizes to them were given by Cmdr Muhammad Ilyas, President BGCG&C. In Girls Albatross Category ( 14 to 18 years) Zarmina Khan Won 1st position, Shazmina Khan was 2nd while Meerab Rizwan was 3rd. Among Boys Albatross, Basil Rehman was 1st while Irtaza Hussain was 2nd and Muhammad Darmal won 3rd position. In addition, some relatively elder golfers, aged 18-24 years, were invited to compete in a special Elite Class, with the aim of serving as role models for the younger golfers. In this category Arooba Ali won the 1st prize among girls while Jasia Tassawar was 2nd. Among Boys, Osama Musa was placed 1st while Muhammad Hashim won 2nd position. Prizes to the two senior categories were awarded by the Chief Guest Gen Hilal, Patron in Chief. It needs to be mentioned that Basil ur Rehman from Peshawar earned the distinction of scoring AJGL’s first ‘Hole in One’.

In his speech as the Chief Guest, Gen Hilal pointedly praised two distinct aspects of golf that had achieved a credible level of success during his tenure as President PGF. Firstly, he singled out the achievements of Dr Asma Afzal Shami, the ex Chairperson Ladies Golf, PGF by stating that; “….. in a short span of four years she, along with her lady colleagues, changed the very stature of Ladies Golf in Pakistan, taking it from its previous ‘subsidiary category’ to the unimaginable ‘International Level’, culminating in the historic 1st PGF Ladies International Golf Championship in which seven foreign teams participated.” He further credited her for prevailing upon the Golfing Establishment to institute seven Ladies Golf Championships on the PGF’s Annual Golf Calendar. He also eulogised Munazza Shaheen for conceiving the concept of AJGL and then taking the strategic decision of partnering up with Dr Shami to ensure its practical implementation in such a short span of time. Terming it as an invaluable initiative that has filled a serious existing void in our Golf Development, he said; ” After receiving an extensive brief from Mrs Munazza Shaheen, let me say this, without holding any bars, this idea of AJGL is very well researched, well structured and is certainly not a shot in the dark. I have full faith in this partnership of Dr Shami, who has proven her mettle in Ladies Golf on the administrative side and Mrs Munazza Shaheen, an IT expert and a distinction holding Referee, on the technical side. Within a few years, Inshallah, the AJGL will be producing our best golfers ready to compete at the National and International Levels!”

In the end, Dr Shami and Munazza Shaheen, both lauded the exceptional role played by Secretary BGCG&C, Brig Saeed Dar. To quote Dr Shami; “This event could not have been held without the wholehearted support and invaluable advice that was extended by him to us. We are particularly grateful to BGCG&C for its generosity in being such a gracious, sole sponsor of this Match.