Judiciary must review past decisions 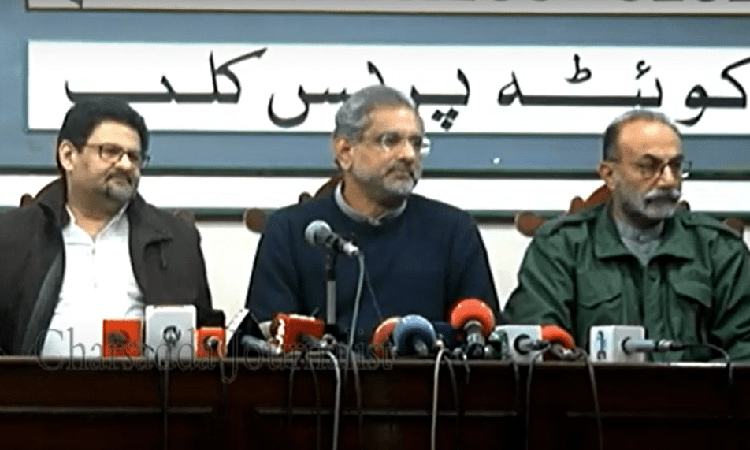 Former prime minister Shahid Khaqan Abbasi on Sunday said the judiciary should review its past decisions, urging it “rectify the injustices” done to former prime minister Nawaz Sharif, whose return to Pakistan is expected soon. He said that Pakistan’s political leadership and establishment are responsible for the current situation in the country. Abbasi expressed these views in a joint press conference with senior party leader Miftah Ismail, former senator Mustafa Nawaz Khokhar, and ex-Balochistan chief minister Aslam Raisani in Quetta.

“Economic crisis and political conflict will not solve the problems of the people,” said Abbasi.

He furthered that there is no “miracle solution” for the economy, adding that the country needs political stability.

“I am not here to defend my party and the government, but the problems of the last 20 years cannot be resolved in eight months,” the PML-N leader said.

At the press conference, former finance minister Miftah Ismail stated that Pakistan has to repay the loans of $21 billion. “We have to focus to uplift the agriculture sector in the country,” he added. The PML-N leaders have been holding non-partisan talks on the current economic and political situation in Pakistan.

A day earlier, the leaders also commented on the issues of Balochistan at a seminar titled: ‘Reimagining Pakistan’ organised by Balochistan Peace Forum (BPF) chief Nawabzada Haji Lashkari Raisani to discuss ways and means to pave the way for a political settlement of issues relating to the country and the province. On the occasion, Nawabzada Lashkari Raisani said that they had “tried to present the problems of Balochistan to the political leadership of Pakistan”. He had demanded that Haq Do Tehreek (HDT) leader Maulana Hidayatur Rehman and other captives in Gwadar be released and the cases against them ended.

Separately, in a tweet on Sunday, Mustafa Nawaz Khokar thanked the session’s hosts – Lashkari, Humayun Kurd and others – and remarked that his “take-home message” from the seminar on Saturday was that the “youth here are completely disinterested in politics, which has failed to deliver on any of their issues”. He noted that the regional political parties repeatedly raised concerns about how “parliamentary politics has solved any of our issues”, such as missing persons, fair distribution of resources and freedom from oppression.