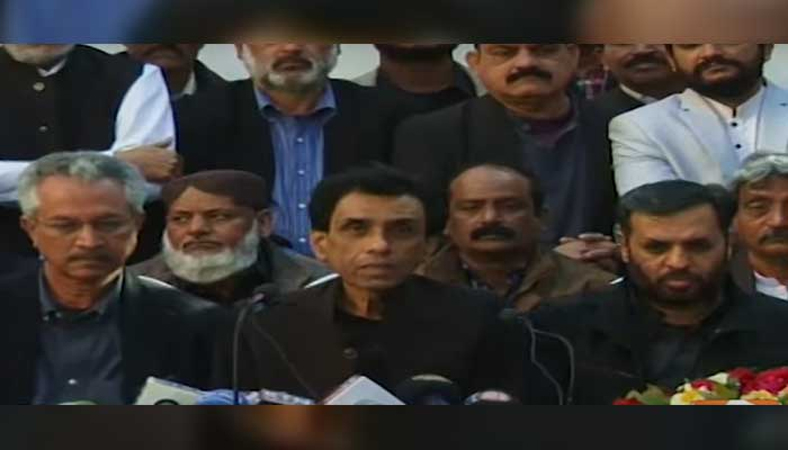 The MQM-P Convener Khalid Maqbool Siddique Sunday said the “political engineering” being carried out to decide the mayor of Karachi would not be accepted at any cost. Addressing a press conference alongside MQM-P leaders Mustafa Kamal and Waseem Akhtar in Hyderabad, Siddique highlighted how the public’s mandate was not being respected. He added that rigging was being carried out for the past 50 years as voter lists and delimitations were based on a flawed census. “When our case was strong, the Supreme Court should have taken a suo moto notice,” he said. “We, however, raised our voice in the parliament but to no avail.” Siddique said the MQM-P had decided to take to the streets with public support against pre-poll rigging. Meanwhile, Jamaat-e-Islami’s Hafiz Naeemur Rehman called for developing consensus among political parties for the sake of Karachi’s development in the wake of local government elections in Sindh. Speaking to the media in Karachi alongside PML-N Sindh President Shah Mohammad Shah, he said: “Before the election commission announces their decision, we want Shah to play a role in developing a consensus between all the parties of Karachi so that they come onboard and their mandate is accepted.” Rehman said that he came to meet Shah because of his political experience and the latter’s familiarity with the dynamics in Sindh. The JI leader stated that Karachi could not afford “further division”. “Despite our differences, all stakeholders should form a consensus for the sake of the city’s development.” Rehman pointed out that everyone would reap the benefits if all political parties reached a consensus instead of indulging in the blame game. “This way every party will move forward and the competition will be in the field of work.” He further said: “Politics, administration, and democracy cannot move forward until local bodies are empowered.”