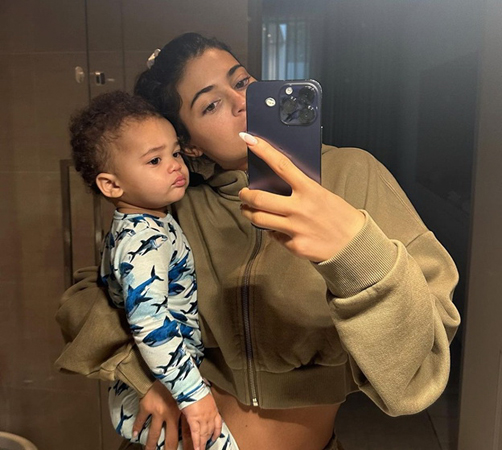 World, meet Kylie Jenner and Travis Scott’s son Aire. The Kardashians star introduced fans to her and the rapper’s baby boy by posting the first photo of his face to Instagram on Jan. 21.

The post, which also served as the reveal of Aire’s new name, featured photos of the little one in a high chair and on his mom’s hip.

Kylie and Travis welcomed their son on Feb. 2 but waited until Feb. 6 to share news of his arrival with their followers. At the time, the duo, who are also parents to 4-year-old daughter Stormi Webster, posted a picture of the newborn’s hand to Instagram along with a blue heart emoji and the birthdate.

As for why they ditched the old name? “We just really didn’t feel like it was him,” Kylie said. “Just wanted to share because I keep seeing Wolf everywhere.”

While Kylie and Travis continued to give fans a few glimpses into their life as a family of four, they kept many details about their son’s identity private, concealing his face in pictures and not revealing his new name until now.

“We’re just not ready to share yet,” the makeup mogul said on a September episode of The Late Late Show, noting at the time that they hadn’t legally changed the moniker. “You know, Travis…one day he’ll be like ‘Ooh, this seems kind of cool’ and change it again.”