* Out of concern for the cameraman, Fatehi approached him and while offering to help, she unconsciously said, 'Sambhal ke giro' 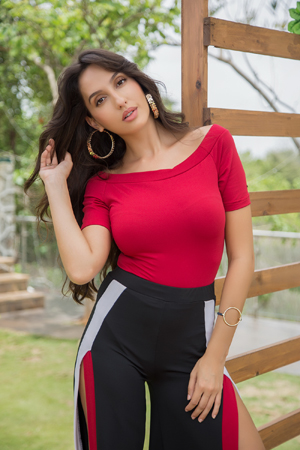 Bollywood actor-dancer Nora Fatehi got roasted by social users after telling a paparazzo “sambhal ke giro, (fall safely)” in a viral video. In a viral video shared by an Indian paparazzo account on Instagram, the ‘Street Dancer’ actor stepped out for her daily routine when one of the shutterbugs tried to capture a glimpse of her and tripped onto the ground in the process. Out of concern for the cameraman, Fatehi approached him and while offering to help, she unconsciously said, “sambhal ke giro, (fall safely).” The phrase drew the attention of social users and became a reason for widespread laughter across the internet.

“Bhayi sambhal k gir lekin gir jaroor” another Instagrammer wrote in the comments section, while a third person joked, “sambhal ke ghirne ka yrr.. ese kese chalega..dekho dang se chot bhi nhi lgi… ek take or lete h chlooo, are.” Meanwhile, Nora Fatehi has recently turned witness in the multi-million-rupee fraud case of conman Sukesh Chandrashekhar. She told the court earlier this week that one of the conman’s aides, Pinky Irani had contacted her cousin with an offer from the former to be his girlfriend, in exchange for a big house and luxurious lifestyle.