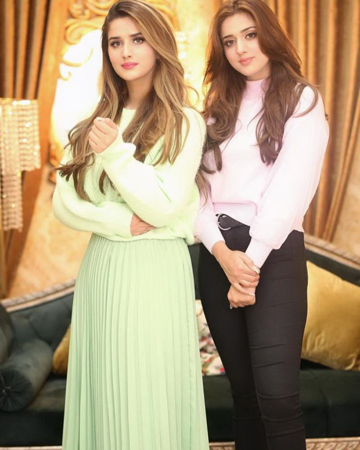 TikTok star Jannat Mirza has finally jumped onto the dance bandwagon and re-created her version of the popular number Mera Dil Yeh Pukaray Aaja with her sister Alishbah Anjum.

Winning hearts online, the Tiktok sisters duo can be seen dressed in causal winter laid-back looks and dancing their hearts out with synchronised moves.

Alongside her sister, the Tere Bajri Di Rakhi actor can be seen dancing to the tunes of the viral song.

The video has garnered massive views and it’s safe to say Alishbah and Jannat’s popularity has the power to storm the internet with just one video. Falling under the radar, the keyboard warriors made sure to drop comments under her post. Mirza is one of the biggest TikTok stars from Pakistan. She is not just a social media influencer but a future actress. With over a million followers on the popular video-sharing platform, Jannat is the only TikToker with such a huge fan following. The social media sensation was recently enjoying her vacation in Japan.

The viral song, Mera Dil Yeh Pukaray Aaja, is getting all the attention on social media since a Pakistani girl named Ayesha Mano performed a mehndi dance to it last month.

Ayesha, who became an overnight sensation after her viral dance video on a classic Indian song went viral, is all over the internet as her trend is now being recreated with different renditions.