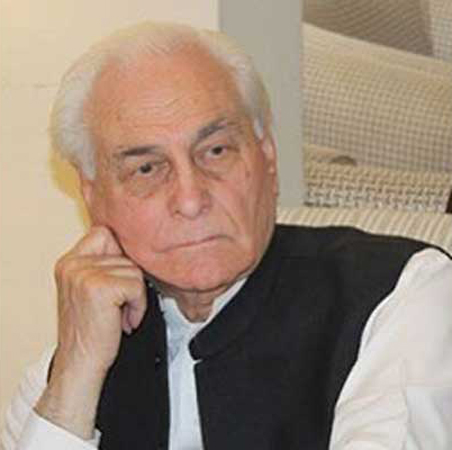 In a surprising development, the Khyber Pakhtunkhwa government and the opposition have reached an agreement on the name for the interim chief minister in the province, a private TV channel reported.

The name of former KP chief secretary Azam Khan was unanimously agreed upon in the meeting held to finalise the appointment of the province’s caretaker CM. “Azam Khan is our consensus candidate for the post of caretaker chief minister. We have chosen a person who is acceptable to all,” said Jamiat Ulema-e-Islam Pakistan-Fazal (JUI-F) leader Akram Khan Durrani.

Commenting on the development, KP Chief Minister Mahmood Khan said the name of a caretaker chief minister was unanimously agreed upon for the first time in “history”. “We agreed on Azam Khan in consultation with our leader,” Khan said, referring to Pakistan Tehreek-e-Insaf Chairman Imran Khan’s nod for the candidate.

Durrani said that the government and the opposition jointly nominated Azam Khan, adding that names of Zafarullah Khan and Sahibzada Saeed were also considered. He said that PTI leader and former defence minister Pervez Khattak played an important role in reaching the consensus.

“We agreed on Azam Khan as our consensus candidate. We have chosen a person who is acceptable to all,” said Durrani. “We decided on Azam Khan’s name after consulting with our leader,” CM Mahmood Khan said.

A summary of caretaker CM’s appointment has been sent to Khyber-Pakhtunkhwa governor. The summary is signed by Chief Minister Mahmood Khan and Leader of the Opposition Akram Durrani.

The nominee has held the office of federal secretary for the ministries of religious affairs and petroleum. He had obtained his Bar at Law degree from the Lincoln’s Inn, London.

While the KP Assembly’s dissolution took place much later than the Punjab Assembly, the unanimous decision of naming the caretaker chief minister was done more rapidly in the northwestern province.

In Punjab, meanwhile, the government and opposition remain at loggerheads over finalising the name of the interim chief minister.

The committee to appoint the caretaker CM in Punjab met earlier in the day, but the meeting ended with no results and leaders from both sides criticised one another in their pressers. The matter will now be taken up by the Election Commission of Pakistan (ECP), which will decide who will be appointed to the post within two days.