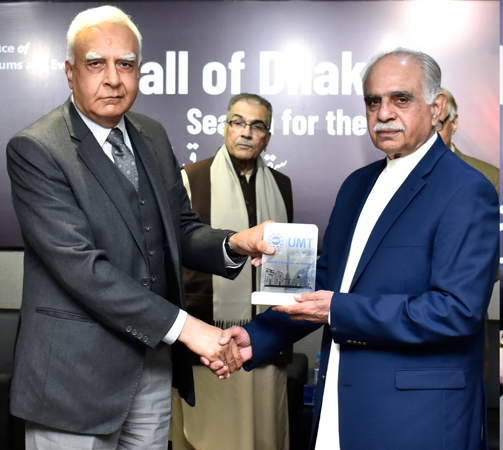 University of Management and Technology (UMT) in collaboration with Office of Forums and Events, Department of Political Science& International Relations organized a seminar on the topic of Fall of Dhaka: Search for the Truth.

Lieutenant General Retired Ghulam Mustafa, Senior Defense Analyst encouraged UMT for organizing seminar on such an important topic. He said that Pakistanis have always been presented and highlighted in the wrong perspective as we did our best to share food, terrain and resources. Even when we were losing the war, the Bengalis wanted to stay united and were heartbroken. He also said that the role of Pakistan army has been positive and important. The army was limited in number and resources, yet fought bravely. Lieutenant General Ghulam Mustafa advised the youth to move on, analyze the context of history in a balanced outlook and play a role to make Pakistan a progressive nation.

Senator Javed Jabbar expressed his views and said that the future is unknown but the history is all clear in front of us to explore and learn. Elaborating the topic, he said that the most catastrophic decision was to suspend the national assembly which unleashed the wave of violence and dreadful acts were undertaken silently.Indians and Bangladeshis tarnished the name of Pakistan, he added. Senator Javed further said that the search for truth is unsupported and forgotten. We need to remain focused and learn from India’s pivotal role in creating Bangladesh. The reality further needs to be probed with research, he advised.

Dr. Junaid Ahmad, the keynote speaker expressed his gratitude to UMT for organizing such an event. Addressing the audience, he said that we need to understand the creation of Pakistan was miraculous and we need to be very grateful and thankful for this blessing. Elaborating the issue, he said when floods and cyclones hit West Pakistan, the funding was not properly utilized by the government, the elections were not fair and India took advantage and supported Bengalis at that time. The truth of the matter is that we did not give them a fair share of value and funds which resulted in the separation from Bengalis. Dr. Junaid emphasized that there are powers working to dismantle Pakistan but we are not giving attention. We need to learn from history in order to save our honour, he suggested.

Writer and Diplomat Shamshad Ahmad in his talk said that the search for the truth is still ongoing because everything around us is a lie. He stressed that now Pakistan is in a worst condition than 1970 because the nation does not have the principles and sentiments like the nation of 1970. Mr. Shamshad said that only the youth can take Pakistan out of the gruesome condition.

Senior Journalist Mujeeb ur Rehman Shamiwhile addressing the seminar said that to understand history, we must revisit history keeping in view the situation of that time. Due to the addiction of power of Pakistan’s politicians, East Pakistan was separated from all of us, he said. We have not learnt from history that decision making organizations should not be dissolved but provided security, he said. He advised the youth to live peacefully with each other and give one another their personal space.

Lieutenant General Javed Hassan, Chief Advisor to President UMT drew attention to the fact that Bangladesh is the reaffirmation of the two-nation theory. He also emphasized that the Bengalis started the movement that there should be one nation not two.

At the end of the ceremony, UMT Rector Dr. Asif Raza presented souvenirs to the guest speakers of the event.