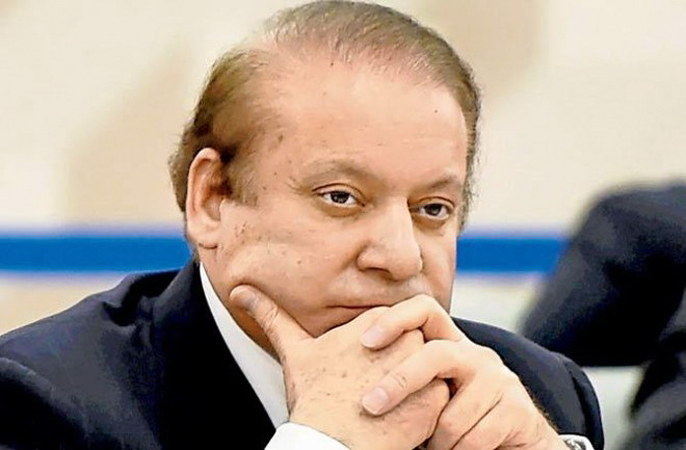 Pakistan Muslim League-Nawaz (PMl-N) supremo Nawaz Sharif on Thursday took notice of reports of deepening fissures, groupings and forward blocs emerging in the party. He clearly warned that those who do not take the party’s policy forward, will not be retained, a private TV channel reported. Talking to journalists outside his son Hasan Nawaz’s office in London on Thursday ahead of a key party confab, Nawaz took a swipe at former prime minister and Pakistan Tehreek-e-Insaf (PTI) Chairman Imran Khan. The PML-N leader accused Imran of toying with the nation during his near-four-year tenure. Nawaz further claimed that during their tenure, the people were happier and the economy was thriving. “Just compare my four years with Imran Khan’s tenure,” he suggested. He further assured that the PML-N will guide the country out of its current difficulties. Federal Interior Minister Rana Sanaullah, who arrived in London on the other day for key meeting of the party ahead of polls, expressed confidence in having sufficient numbers in the province.

“I f someone seeks to deceives us, they will be left nowhere,” he said, referring to past practice of desertions ahead of elections. He further stated that the PML-N will succeed in the upcoming by-polls in Punjab.

On the return of PML-N Senior Vice President Maryam Nawaz – whom reports said that would return on January 29 – the federal interior minister confirmed her return. He added that upon her return to Pakistan, Maryam would engage in reorganizing the party. Further, he said that Nawaz Sharif too will return to the country soon and would lead PML-N’s election campaign. “Nawaz Sharif wants to return the country as soon as possible.”