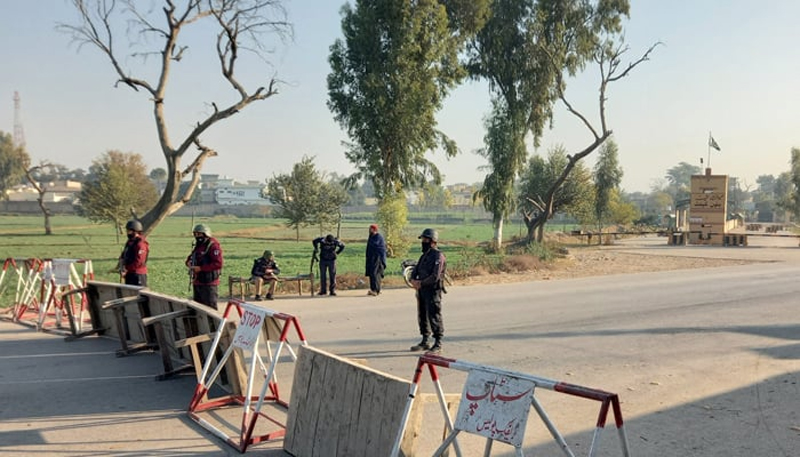 In the latest strike on law enforcers, at least three policemen were martyred in a terrorist attack on a police check-post in Khyber Pakhtunkhwa’s Khyber Agency Thursday. The area’s police said terrorists opened fire on the check-post in Tekhta Beg and used explosive material in the attack, after which the police station caught fire. The exchange of fire between the police force and terrorists is still underway. Immediately after the attack, the traffic on the Pak-Afghan Highway was shut down and a heavy contingent of police was dispatched to the check-post. Talking to journalists, Jamrud SHO Shah Khalid termed the storm on the police check-post a suicide attack. “The suicide bomber entered the check-post and blew himself up.” The SHO added that the police opened fire on the target upon seeing the suicide bomber. Two policemen – Manzoor Shah and Younis Khan – were martyred in the attack, while a cook in the check-post, identified as Rafiq, was shifted to the Peshawar hospital where he succumbed to his wounds. Taking notice of the attack, KP Chief Minister Mehmood Khan’s has asked the IG Police for a report on the incident.

“The incient is very sad, the sacrifices of the martyrs will not go in vain,” the CM said. This is the second suicide blast incident in Pakistan in a month. On December 23, a bomber exploded his explosives-laden car in a densely populated, residential area of the federal capital, martyring a police official and injuring at least 10 others. A police spokesperson said , police saw a vehicle driving on a service road in Islamabad’s Sector I-10/4 near the residential street 31 and when Police asked the driver to stop the car, the suicide bomber sitting in the back seat blew himself.