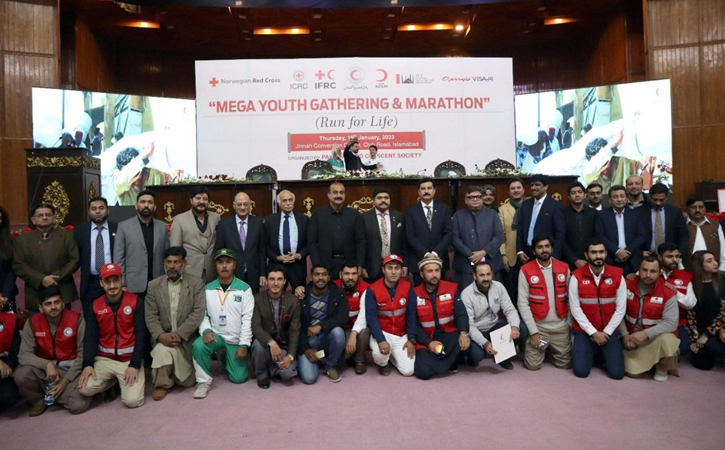 Pakistan Red Crescent Society (PRCS) organised mega youth gathering and marathon event of 5,000 youth including students of different institutions of twin cities of Rawalpindi and Islamabad for the relief and rehabilitation of flood-affected families. The event was held at Jinnah Convention Centre on Thursday.

Addressing the ceremony, PRCS Chairman Sardar Shahid Ahmad Laghari said that the main purpose of this event was to raise funds, mobilize youth and volunteers and to channelize their efforts for relief and rehabilitation activities for the flood-affected communities. He said the Red Cross Red Crescent Movement has 15 million volunteers and PRCS has a batch of 750,000 trained volunteers. “The volunteers associated with the PRCS in the flood affected areas have made history and the role of volunteers in rescue and relief has been key”, he added.

Sardar Shahid Ahmad Laghari said that PRCS has provided humanitarian assistance to over 2.3 million people through health care, Mobile Health Units, provision of food, non-food items, tents, cooked food, health and hygiene promotion. He requested the participants to join PRCS and play their effective part for the rehabilitation of flood victims. “What can be a greater good than if someone’s day is enlightened by your donation, if someone gets a warm quilt from the given charity, the prayer coming out of the trembling lips will give you joy, your small part can become someone’s happiness”, he added.

The Guest of Honour, former Deputy Speaker and Federal Minister for Poverty Alleviation and Social Safety Faisal Karim Kundi said that the Red Crescent has comforted the nation in every difficult time. He said equipping the youth with training in first aid and disaster management is the distinction of the Red Crescent. He said the current leadership of PRCS has shown its iron.

Patron-in-Chief of Pakistan Sweet Homes, Zamard Khan, in his speech, praised the efforts of PRCS, describing the youth as a symbol of change. He said that the youth role in the rehabilitation of the flood victims is highly commendable.

On this occasion, the Red Crescent Associate Members Drive was launched and two people were awarded honorary membership. All the participants took an oath to work as volunteers with the Red Crescent. Cash prizes were distributed among the position holders of Marathon. Mobile Blood Camp was also setup where 33 units of blood donations were collected.

In the end, commemorative shields were presented to Zamrad Khan and Faisal Karim Kundi.