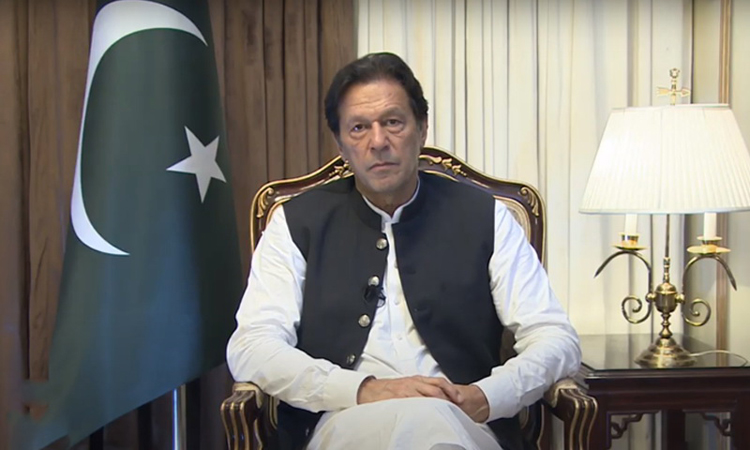 Predicting that the general elections might take place in the country in April, former prime minister and Pakistan Tehreek-e-Insaf (PTI) Chairman Imran Khan on Wednesday said that his party had “no relationship with the new military leadership yet”.

“Look, we don’t have any relationship with (the new military leadership) at the moment,” the ex-premier said to a question during an interview with BBC Urdu. Blaming former army chief Gen (retd) Qamar Javed Bajwa for ‘helping’ PDM form government, the PTI chief predicted that the government will now be “forced to hold general elections by April”.

“Someone needs to ask them why they overthrew our government via a conspiracy despite giving the best performance in the past 17 years. What mistake were we making that they brought down our government in collusion with an army chief. They have not been able to handle it (economy) since then,” he said, adding that the incumbent government came to power through an auction, not through democratic elections.

The PTI chief said that he and former finance minister Shaukat Tareen had told Gen (retd) Bajwa that he had created instability to make the conspiracy successful, adding that he had predicted the new government will not be able to manage the economy and he has been proved right.

“The market soon lost confidence in them. They (government) were busy with their theft and taking NRO-2. Chaos soon began to rise in the country. Ask any trader today… is it because of us,” he questioned. Imran said what General (retd) Bajwa did to the country in connivance with the government, not even the enemies of Pakistan would have done. “See where Pakistan stood in April [last year] and where it is standing now. They (the opposition at that time) held three long marches during our tenure and kept criticising the government but we continued to progress.” Censuring the incumbent government for the economic crisis in the country, the former premier said that Pakistan’s economic conditions were never like this, emphasising that fair and transparent polls are the only solution to these problems. “The current government led by Prime Minister Shehbaz Sharif has come into power through horse-trading,” claimed the PTI chief.

The PTI chief added that the coalition rulers have kept themselves above the law and ended the corruption cases that they were booked in years back. “Shehbaz Sharif, Nawaz Sharif, Asif Zardari, and Maryam Nawaz – all of their cases have been forgiven.” He said that in a bid to move towards free and fair elections, his party “sacrificed” two assemblies – Khyber Pakhtunkwa and Punjab. “Now this government will be forced into holding elections in April.” To a question about the dissolution of Khyber-Pakhtunkhwa and Punjab assemblies, Imran said that no one in Pakistan dissolves their own government. “Current government came into power via ‘auction’ not after elections,” he added. He claimed that the Shehbaz government came into power via horse-trading. “They bought loyalties by paying Rs200 to Rs250 million to people.

Imran alleged that the former army chief helped current rulers clear corruption cases worth Rs 1,100 billion. “They have sunk the economy. Pakistan has never faced such financial issues it is facing today,” he added. Reiterating his stance, Imran said that the only solution to the country’s problems was fair and transparent elections, adding that the local and foreign investors do not trust the incumbent government. “We’re in quicksand. Holding free and fair elections is the only solution to avoid situation similar to Sri Lanka. That is the reason we dissolved both our governments [in Punjab and K-P].” The deposed prime minister claimed that the establishment tried its best that PML-Q’s Pervaiz Elahi became PML-N’s chief minister in Punjab. “They tried their best that [Pervaiz Elahi] does not leave the chief minister’s post but he remained loyal to us and we had to return loyalty from our end as well,” he added. The PTI chief admitted that he had changed his stance over many matters but said that his opinion about the Taliban remained more or less the same over the years.

“When rulers in Afghanistan were changed, the Afghan government told TTP to return to Pakistan. Ghani government used to encourage them and they used to attack us from there (Afghanistan,” he said. “When this other (Taliban) government came into power, they told them to go back. So when they had to return, what options did Pakistan have? We had two options. Either shoot these 40,000 people, warriors and their families or rehabilitate them. All political parties agreed on this (rehabilitation) but it was not implemented,” he said. Imran said that the extremism in the country did not increase suddenly. “When they slowly returned, we did not rehabilitate them and no one paid attention to them. No one spent any money on them which we had decided. We had feared that if we did not pay attention to them then terrorism will start happening everywhere which is happening now.”

PTI Chairman Imran Khan on Wednesday alleged that “massive foul play” was afoot during the second phase of the Sindh local government elections, adding that such “manipulated” polls would only aggravate polarisation and anarchy in society.

In a series of tweets on Wednesday, Imran said that recent reports regarding the polls had made it apparent that the PPP had “no commitment to fair and free elections”. “Instead, it uses force, blackmail, police harassment, money to get votes. Now [it is] also clear why the ECP, its cabal of crooks and their handlers sabotaged electronic voting machines (EVMs),” he added.