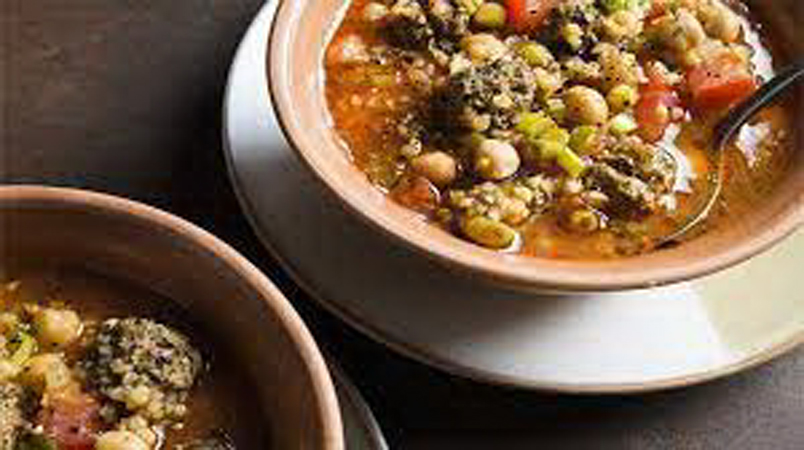 After sunset during Ramadan, the daily fast customarily ends by eating dates. Then the Iftar meal begins with some kind of soup, satisfying hunger and quenching thirst at the same time.

Among the soups served, one of the most common in northern Africa is chorba frik, a meaty chickpea soup richly spiced with cumin, coriander, cinnamon, ginger and more. It inspired this recipe from our book “Tuesday Nights Mediterranean,” which features weeknight-friendly meals from the region. Chorba frik typically simmers chunks of beef or lamb with chickpeas and freekeh, a type of green wheat that has been roasted and cracked. For our simple weeknight version, we use canned chickpeas, coarse bulgur, which is easier to source than freekeh, and quick-cooking ground lamb that has been formed into small meatballs.

We season the lamb with ras el hanout, an aromatic Moroccan blend that typically includes at least seven spices. Look for it in well-stocked supermarkets, spice shops or Middle Eastern grocery stores.

Normally, we prefer the richer flavor of concentrated tomato paste, the type often packaged in tubes. But in this recipe its potent flavor would overwhelm the other ingredients. While the bulgur and meatballs simmer, don’t forget to stir occasionally to prevent them from sticking to the bottom of the pot. This savory soup is a meal in itself, but warm, crusty bread is a perfect paring.

15½-ounce can chickpeas, rinsed and drained

In a medium bowl, stir together the ras el hanout, mint, 1/2 teaspoon salt and 1/4 teaspoon pepper. Add the lamb and three tablespoons water, then mix with your hands until well combined; set aside.

In a large pot over medium-high, heat the oil until shimmering. Add the scallion whites, the celery, garlic and 1/2 teaspoon salt. Cook, stirring often, until the vegetables have softened, about two minutes. Add the tomato paste and cook, stirring, until the paste is well browned, about three minutes.