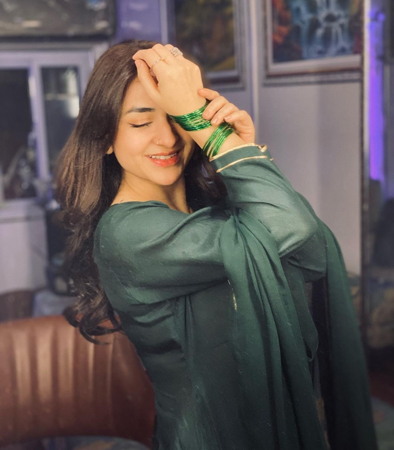 The latest picture shared by actor Yumna Zaidi on her Instagram handle is going viral on social media sites.

The ‘Sinf-e-Aahan’ star treated her 6.3 million followers on the photo and video sharing application with a recent picture of herself on Monday. She penned Urdu lyrics in the caption of the solo picture on the feed.

The stunning snap sees the celebrity flaunt her desi-girl aesthetic in a solid green outfit paired with matching bangles. She kept the look super minimal with no other accessories and barely there makeup.

The now-viral picture was showered with love from her fans on the gram and social users dropped lovely comments for Zaidi in the comments section.

Being one of the top names in Pakistan’s drama industry, Yumna Zaidi has a huge fan following in both offline and online spheres. She frequently updates her social media followers with pictures of her personal as well as professional endeavours.

Speaking of the career front, the A-list actor made her TV debut in 2012 with a supporting role in ARY Digital’s ‘Thakan’, and won acclaim with her limited screen time even before becoming a household name.

She has given some of the most hit projects throughout her career span of over a decade. Some of her notable performances include ‘Khushi Ek Roag’, ‘Sannata’, ‘Guzaarish’, ‘Pukaar’ and ‘Sinf-e-Aahan’.