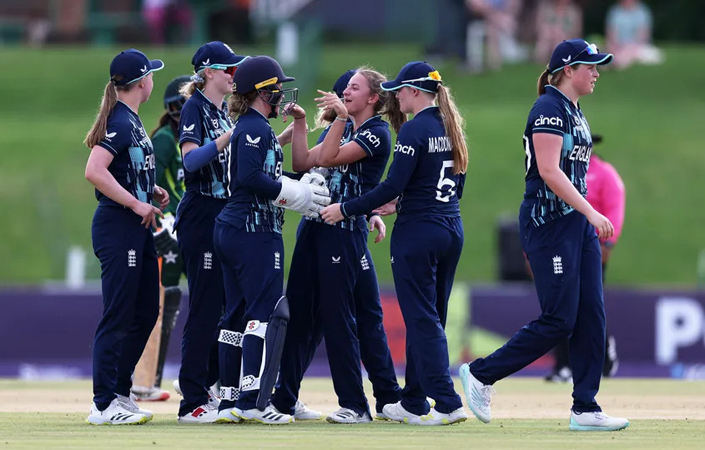 LAHORE: England wore down a determined Pakistan by beating them by 53 runs to maintain their place at the top of the Group B standings at the ICC Under19 Women’s T20 World Cup, ensuring their passage into the Super Six League stage, at Potchefstroom on Tuesday. While they didn’t have it all their way while batting first in the encounter at the JB Marks Oval in Potchefstroom, England’s batting depth still made Pakistan pay for leaking runs towards the end of their innings and set them the more than competitive total of 157 to win.

Pakistan, led by a 36-ball 34 (five fours) by their unrelenting captain, Syeda Shah — aptly nicknamed Aerobics —- were determined in their response but simply did not string enough partnerships to make an impression on the target. Also, England’s bowling attack – thanks in no small part to Sophia Smale’s 2-10 and Hannah Baker’s 1-13 —- was disciplined and never gave them a single over big enough to give them belief.

Having ridden roughshod over an outclassed Zimbabwe in winning their tournament opener by 174 runs, the English side sporting four changes was keen to impose itself after winning the toss and deciding to bat. Pakistan were not overawed however, as the opening exchanges in their innings had the feeling of a boxing match that plays out in a clinch. England were brimming with the intent to cut loose while Pakistan contained them by taking vital wickets just when it seemed like they would. The chief architects of this containment job were left-arm spinner Anosha Nasir and right-arm medium Zaibunnisa, who took four of the seven wickets that fell through figures of 2-20 and 2-24, respectively.

At times, the two were helped by some inspired fielding, mostly from Shah, whose catch to remove Liberty Heap off Noor Bhatti’s bowling is contender for catch of the tournament. Having failed to take a catch off Heap’s opening partner Grace Scrivens the ball before, Shah back-pedaled at mid-off and stuck out a mitt as she fell backwards, with the ball landing in her outstretched hand. But, England were nothing if not persistent, with one of the changes —- player of the match Seren Smale —- top-scoring with a 33-ball 37 (six fours), Ryana McDonald-Gay going unbeaten on 35 (three fours, one six) and Scrivens chipping in with 24 (four boundaries) to ensure a total of 156/7.

Toss: England, who elected to bat.