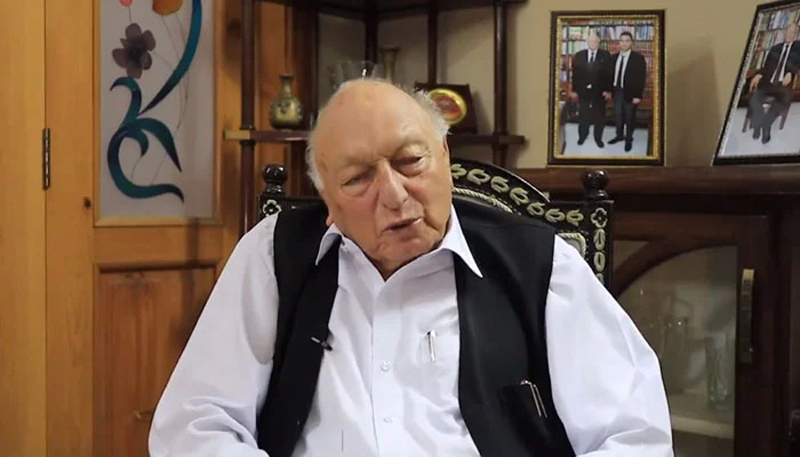 Former President, Supreme Court Bar Association (SBCA) and senior lawyer, Abdul Latif Afridi has been shot dead in the bar room of Peshawar High Court Bar Association here on Monday. According to police, the senior lawyer received six bullet injuries and was rushed to Lady Reading Hospital, Peshawar where he succumbed to his injuries. Police said the alleged killer was arrested on the spot and shifted for interrogation. The motive behind the murder can’t be immediately ascertained. Abdul Latif Afridi had served as President SCBA, PHCBA and as Member National Assembly. He was an expert of constitutional affairs and legal subjects. He survived several life attempts in the past and narrowly escaped. The lawyers protested against the brutal killing of their senior colleague and chanted slogans.

They boycotted the court’s proceeding and demanded the unmasking of the mastermind behind the broad day murder of Abdul Latif Afridi. SSP Operations, Kashif Alam Abbasi here Monday said the accused, who fired at senior lawyer Abdul Latif Afridi inside the bar room of Peshawar High Court (PHC) has been arrested red-handed and identified as Adnan Sami Afridi’s advocate. Briefly talking to the media, the SSP said the weapon used in the murder of senior lawyer Latif Afridi was recovered from the possession of the accused, who was shifted for interrogation.

Senior lawyer and former President Supreme Court Bar Association (SCBA), Abdul Latif Afridi was shot- dead inside the bar room of Peshawar High Court this morning. Afridi was shifted in critical condition to Lady Reading Hospital Peshawar after receiving multiple bullets where he lost his battle for life. Kashif Abbassi claimed that Latif Afridi was killed over an old enmity. He further claimed the accused Sami Afridi advocate was the nephew of the deceased judge of Anti Terrorism Court Swat Aftab Afridi, who was brutally killed by unknown gunmen along with three members of his family near Swabi Motorway Interchange in April 2021.

The SSP said Latif Afridi Advocate was also nominated in the FIR of the deceased judge. He said the investigation was underway from different angles including security lapses and strict action would be taken in case of any shortcoming of security on the premises of PHC. SSP said a pistol used by the accused in the attack was recovered.