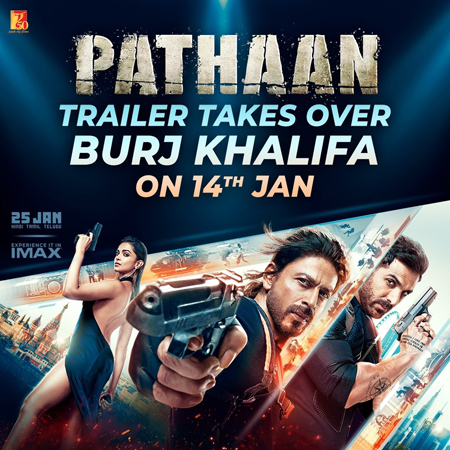 The trailer of the upcoming Bollywood film starring Shah Rukh Khan ‘Pathaan’ was played on the world’s tallest building Burj Khalifa in Dubai on Sunday.

‘Pathaan,’ which releases on January 25, is one of the most anticipated Bollywood films of this year. It will mark the ‘Dilwale’ star’s full-fledged return after a four-year hiatus.

It is pertinent to mention that the action scenes of the film were filmed in Dubai. The city was featured in the trailer.

Yash Raj Films announced the trailer’s broadcast at the Burj Khalifa on Twitter.

“Brace yourselves for a visual spectacle – catch ‘Pathaan’ trailer on Burj Khalifa on 14th Jan” the tweet read. “Celebrate #’Pathaan’ with #YRF50 only at a big screen near you on 25th January. Releasing in Hindi, Tamil and Telugu.” An Indian news agency reported Shah Rukh Khan will be present when it is played at Burj Khalifa.

Yash Raj Films’ Vice President of International Distribution Nelson D’Souza said it should be marketed in the “grandest manner”.

“‘Pathaan’ is one of the most eagerly awaited films of our times and a film like this deserves to be mounted in the grandest manner when it comes to presenting it to audiences,” he said. “We are thrilled to announce that Dubai will be celebrating Shah Rukh Khan and ‘Pathaan’ as the trailer of the film will be showcased on the iconic Burj Khalifa.

“We are delighted that Shah Rukh Khan, who is currently in UAE for the International League T20, will make time to be present when the trailer plays out on one of the most significant architectural marvels of the world.” He added: “SRK has an unprecedented fan following in the UAE and we feel this activity befits the hype that Pathaan carries today.”