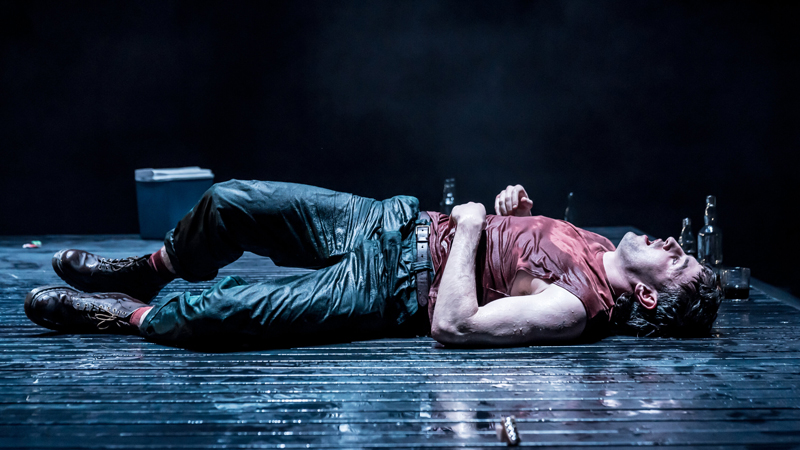 “I don’t want realism. I want magic!” Blanche’s famously desperate cry holds the key to most approaches to “A Streetcar Named Desire.”

Productions of Tennessee Williams’ masterpiece tend to chose one or the other: overemphasizing the sweat and grit of life with the Kowalskis or slavishly obeying Williams’s instructions to deliver Blanche’s tragic, hope-filled reverie. But director Rebecca Frecknall’s hypnotic production goes for broke, slinging out almost all of Williams’ stage directions and simultaneously delivering both. With Patsy Ferran and Paul Mescal in incandescent form, she brings the classic roaring back to electrifying life.

Williams’s carefully detailed, literal two-room apartment is never shown. Instead, heralding her entire approach, Frecknall opens the play in an expressionist whirlwind of fraught, choreographed action on a bare, raised, in-the-round stage, topped off by a percussionist, who is perched above and intermittently orchestrates and punctuates the proceedings. Only when strictly essential, chairs and props are handed over by actors prowling round the rim of the suitably cramped stage. Yet, enhanced by Lee Curran’s cunning lighting, all the vital, fierce claustrophobia is communicated.

Instead of being a directorial conceit, her approach frees everything from displays of anecdotal acting, which can typically bedevil Williams productions – the kind that illustrate everything by, say, over-indicating heat via spray-on sweat or waving handkerchiefs. Here the cast focuses, not on display – of character or moment – but on the relationships between one another. And with nothing in the way to obscure that, intent becomes thrillingly paramount.

That’s embedded in the way everyone speaks. Accents are unusually secure and no-one falls into the phony, languorous “Southern” trap. And with more rapid speech rhythms galvanizing everything, there are huge gains in punch and power. Frecknall harnesses all that to build tension which she paces to perfection. Long-held moments of tension and shock land with real weight because they are so fully earned by the passion that has preceded them.

Never for a moment is the audience allowed to forget that “Streetcar” is a play examining and ignited by desire – the threat of it and its ramifications. But again, sex is only ever overtly displayed when explicitly demanded, as in Stanley and Stella’s emotionally complicated, erotically charged make-up sex. Elsewhere, it is pungently evident by its suppression or its loss, as in the stylized appearances of the ghost of Blanche’s husband who killed himself when Blanche shamed him.

As in her awards-garlanded “Cabaret,” Frecknall’s trump card is in her casting. Dwayne Walcott’s slightly lumbering Mitch is beautifully tender and hurt, while Anjana Vasan’s Stella makes unusually complete sense of a complex woman, in thrall to the animal magnetism of the man who has released her from her past and keeps her in a highly physicalized present.

Her Stanley is Mescal, riding high on the back of his BAFTA-winning turn in the BBC’s “Normal People.” Shedding the tenderness that helped make him, Mescal’s panther-like Stanley luxuriates in his physical prowess. The actor makes Stanley not just dangerous but scarily pleased with himself, a vicious grin atop a body utterly at ease. Yet he is no simple brute. Despite his strutting self-confidence, Mescal shows the rawness of a man who cannot fully explain himself to himself. And giving the character a low centre of gravity, he releases both astonishing physical and vocal power. His cry of “Stella” rips through the theatre not as a generalizing shout but as an acutely upsetting cry of pain.

His antipathy towards and connection to Blanche charges up the entire evening.

Ferran took over the role during rehearsal when the original actor, Lydia Wilson, was injured. Petite and taut, 33-year-old Ferran isn’t typical casting for the self-deceiving Blanche, usually played by an older actor channelling a faded Southern belle. But that image is solely in Blanche’s head. Ferran gives something else entirely.

Her fluttering hands and the changing tensions in her expressive body express the rapid workings of a racing mind. Her Blanche wields every trick at her disposal – including an unusual and welcome degree of humour – to try to avoid cracking under the pressure of her self-deceit. It’s a compelling high-wire act that draws the audience to her without the actor ever overtly wooing them. Shorn of sentimentality, her performance allows desperation to inexorably swallow her up. Her defiance in her final moments holds the audience rapt, even when everyone knows what’s coming.

Ferran and Frecknall first worked together in 2018 when the latter burst upon London’s theatrical scene with an arrestingly rethought “Summer and Smoke.” Together they made second-rate Williams feel like the most exciting play he wrote. There’s less room for reinterpretation in “Streetcar,” but by respecting and delivering the ideas of the play, not just its celebrated leading roles, Frecknall not only underlines it as a magnetic masterpiece, but she also proves once again that she is a theatrical force to be reckoned with.