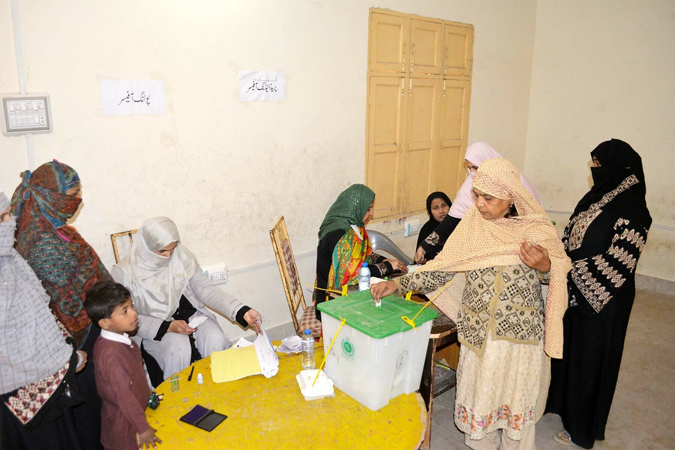 Polling-which took place in 16 districts of Karachi and Hyderabad divisions in the second phase-began at 8am and continued till 5pm without any break.

But, hours after the end of polling, results were still awaited from most districts in Karachi division, with reports of polling agents not receiving Forms 11 and 12 from presiding officers, and reporters complaining of being barred from covering the vote counting process.

Although the Muttahida Qaumi Movement-Pakistan (MQM-P) boycotted the polls at the 11th hour, Sindh Minister for Information Sharjeel Inam Memon observed that the voter turnout was “fine”.

The PPP emerged victorious in Karachi’s Malir district. According to unofficial results, the PPP won 29 seats of union committee chairman and vice chairman, sweeping the polls in Gadap, Malir and Ibrahim Hyderi.

However, the PPP was defeated in Gulshan-i-Hadeed’s UC-4, which was won by the JI’s candidates for chairman and vice chairman.

Foreign Minister Bilawal Bhutto-Zardari – who is also the PPP chairman – said on Twitter that his party had “swept” the polls.

The security situation mostly remained peaceful, and the polling process continued without hindrances at several stations. However, a clash took place between an independent candidate and his PPP counterpart in Matiari, resulting in the injury of at least four people.

After the polling process ended, another clash took place in Karachi’s Chanesar Goth, with two workers from two political parties – PPP and Jamaat-e-Islami (JI) – exchanging blows. Following the incident, a heavy contingent of police and Rangers reached the site.

The ruling PPP filed a complaint with the ECP regarding candidates interfering in the electoral process.

The complaint stated that in Kemari District, Maripur Town, Machar Colony, UC-6, about four polling stations were overcrowded, the polling process was slow and the candidates were disturbing the polling staff in performing duties.

The PPP requested the commission to conduct a “timely investigation” into the matter in order to “ensure free and fair elections”. According to reports, PPP leader Salman Murad attempted to enter polling station number 202 and 203 in the metropolis. The polling staff asked Murad to leave the station, however, despite their resistance, the PPP leader forcefully entered the station. Shortly after, PTI workers gathered outside the polling station and the police arrived in large numbers.

Moreover, the PPP also filed a complaint with the electoral watchdog against PTI leader Firdous Shamim Naqvi for allegedly attempting to break the seal of ballot boxes in Tehsil Municipal Committee Jinnah. As the polling process was underway, the Election Commission took notice of “irresponsible statements” issued by the political parties during the LG polls. “The statement by Interior Minister Rana Sanaullah is equal to misguiding the people and it shows his lack of awareness regarding the election laws,” the ECP spokesperson said. The commission’s spokesperson said that providing the number of local councils is the provincial government’s prerogative under the Sindh Local Government Act, 2013.

He said that the government provided the number of local councils to the ECP and the Commission was bound to conduct the delimitation process in accordance with the provided number. “The ECP conducted the delimitation process in a transparent way,” the spokesperson stressed. In his statement, Rana Sanaullah claimed that the elections had been “discredited” after the MQM-P – who had reservations over the delimitation – decided to boycott the polls. The ECP also directed Pakistan Electronic Media Regulatory Authority (Pemra) to take concrete steps to stop airing government advertisements on television channels.

Taking notice of the advertisements being aired on different TV channels including the development schemes being run by the Sindh government, the ECP spokesperson said that the polling for the second phase of the LG polls in the province was underway in the province and running of advertisements during the polling is a violation of the code of conduct. The commission has asked the provincial government to immediately stop airing advertisement campaigns, Sindh Election Commissioner Aijaz Anwar Chohan said. Due to the death of 23 candidates and the election of six candidates unopposed in seven districts of Karachi, polling was held on 1,200 out of the 1,230 seats of chairman, vice chairman and ward member.