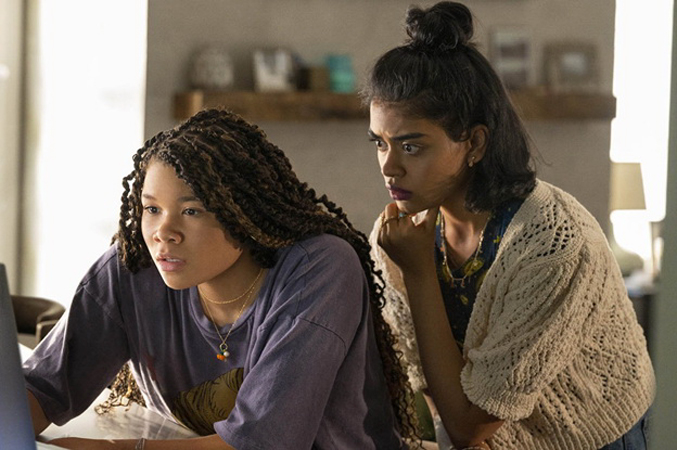 Missing, the follow-up to Aneesh Chaganty’s inventive 2018 debut Searching, is not for the surveillance-state-anxious. Adopting its predecessor’s template, the film mines and manipulates the tools on a computer desktop to tell a pulsating and alarming story.

Directed by Searching editors Will Merrick and Nicholas D. Johnson, Missing opens with video footage of a happy family swiftly hit by tragedy. Fans of the previous film will be pleased with the opening sequence, which creates a conspiratorial thread between the directors and established viewers. A home video shows a young June (Ava Zaria Lee) attempting to record her father, James, (Tim Griffin), on an old camcorder before her mother, Grace, (Nia Long), steps into the frame and gingerly confiscates the device. The intimate moment leads into a more dolorous one: Medical records, Google searches and emails show that James died from cancer. Bereft and overcome with grief, Grace moves from San Antonio to Los Angeles looking for a fresh start.

Missing vaults ahead 12 years to the present day, where June (Storm Reid) has just graduated from high school and Grace has cautiously entered a new relationship with a man named Kevin (Ken Leung). James’ death has created an ever-widening chasm between mother and daughter, who struggle to relate beyond dutiful interactions. It’s clear from her constant eye-rolling and passive-aggressive texts that June, who spends all her time glued to her MacBook, finds her mother’s overbearing and protective nature intolerable. Grace, on the other hand, wears her desire for intimacy with her daughter freely.

Long and Reid are both at home in their roles as the nervous mother and her distant teen. They approach the characters with a light touch, allowing viewers to quickly understand that many of June and Grace’s fights are the result of mutual under-appreciation and poor communication. When Grace asks June to pick her and Kevin up from the airport the Monday after a trip to Colombia, the teen is visibly inconvenienced – even offended – by the request. She half-heartedly listens to her mother’s stern reminders and barely pays attention as she and her boyfriend shuffle out the door.

June spends the weekend without parental supervision raging with her friends. Nightly parties at her house – booze- and music-filled adventures – are chronicled by Instagram stories, TikTok videos and Snapchat photos. When Monday comes around, a severely hung-over June arrives late to the airport to pick up her mother. But Grace and Kevin never show up, leading a panicked June to trace her mother’s digital footprint for answers.

In the five years since Searching’s release, “screen-life” films have become less of a novelty.

The pandemic – which introduced its own subgenre of video chat-based narratives – hastened their infiltration into the mainstream and lowered our tolerance for them. Still, there are fine efforts like Natalie Morales’ Language Lessons, Jane Schoenbrun’s We’re All Going to the World’s Fair and Issa Rae’s Rap Sh!t, which take advantage of our tech-modulated communication to tell different kinds of stories.

Missing understands where it exists in the timeline, and as a result Merrick and Johnson’s narrative (with story credits to Sev Ohanian and Chaganty) doesn’t just focus on the existence of this technology – it also speculates on its effect on society, observing the ease with which we submit to surveillance for convenience and how these apps eventually feed into our insatiable appetite for information. (There’s a particularly fascinating, if a bit overly-forceful and repetitive, look at the proliferation of amateur-sleuthing and true-crime content.)

June enlists the help of her best friend Veena (Megan Suri) and her mother’s friend Heather (Amy Landecker) before getting the authorities involved. True to life, the agent (Daniel Henny) assigned to the case isn’t all that helpful. It’s up to the tech-savvy 18-year-old, who scours the web for clues and hacks into her mother’s accounts, to make the most significant strides in the case.

Missing succeeds at maintaining a propulsive, nail-biting atmosphere and overcoming the boredom of its conventional narrative beats by treating each tool – Gmail accounts, iPhone photos and company websites – as a deeply layered puzzle, one that gathers and offers more information than most people realize. For those already attuned to the tendrils of our increasingly surveilled world, Missing, like an episode of Black Mirror, will mostly confirm suspicions about the ease of tracing even the most stubbornly opaque online lives. For everyone else, it’ll be a chilling wake-up call.