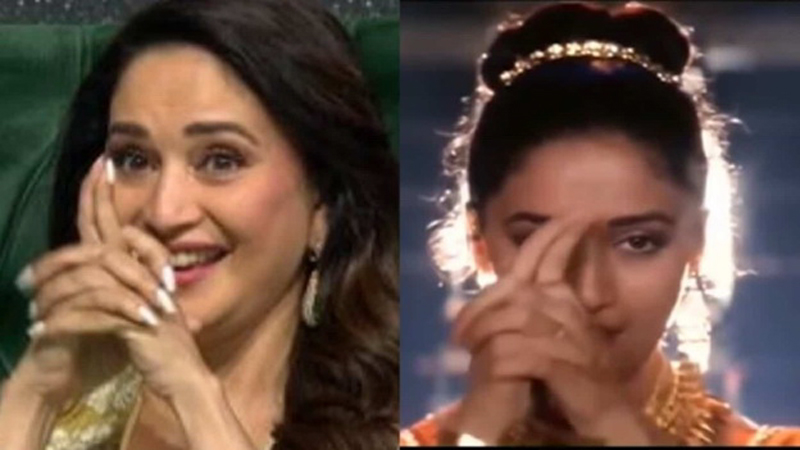 Actor Madhuri Dixit will appear as a guest on Indian Idol 13 and also perform several of her songs on the show. Taking to Instagram, Sony Entertainment Television on Sunday shared several clips of the actor on the singing reality show. For the occasion, Madhuri was dressed in a yellow and white lehenga on Indian Idol 13. Himesh Reshammiya and Vishal Dadlani are the two judges of the show.

In one of the videos, Madhuri spoke about her hook step in the song Tu Shayar Hai Main Teri Shayari from Saajan (1991). Recalling her conversation with choreographer Chinni Prakash, Madhuri shared, “Chinni Prakash told me, ‘For this, Tu Shayar Hai, I will give you an amazing movement (twines fingers).”

She added, “When he showed me this, I said, ‘Yeh kya movement huya? Yeh kaunsa shayar hai? Yeh kaesa shayar hota hai (What is this movement? Who is this poet? What kind of a poet is he)?'” Madhuri then said that Chinni assured her that it would become a famous step, which she added, ‘it did’.

In one of the clips, talking about the late Saroj Khan’s choreography of Bada Dukh Dina O Ramji, Madhuri said, “She was given the song blind for choreography. Sarojji performed in her own style. Subhash (Ghai) ji said, ‘This isn’t the character of the girl’.” After Subhash Ghai explained the character of Madhuri in the film, Saroj said, “Oh! And I choreographed the entire song.” However, they came to a mutual decision later.

Later Himesh sang the song for Madhuri as she smiled. The current season of Indian Idol is hosted by Aditya Narayan.