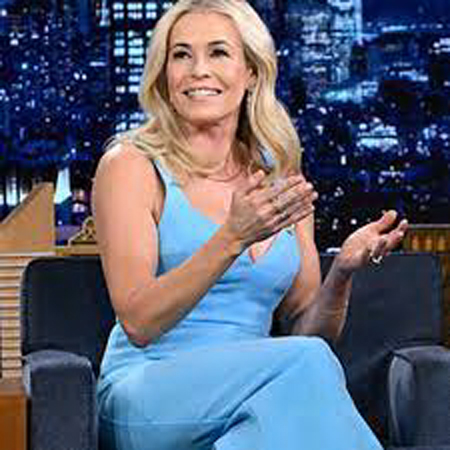 Astronomy is not Chelsea Handler’s strong suit. The comedian appeared to shock Jimmy Fallon on NBC’s The Tonight Show Jan. 12 when she said, “I didn’t know until I was 40 years old that the sun and the moon were not the same thing.”

Fallon responded, “I found this hard to believe, what are you talking about?” Handler continued, “It was shocking to me, as well.”

The 47-year-old, who is hosting the 2023 Critics Choice Awards on Jan. 15 and guest hosting The Daily Show in February, recalled being called out over the matter during a trip to Africa.

“We were on safari,” she told Fallon. “My sister and I were riding an elephant and there was a man riding an elephant for us, because we don’t know how to ride an elephant. And my older sister, Simone looked up at the sky and she said, ‘Chelsea, Chelsea, look up. It’s not often you get to see the sun and the moon at the same time.'”

Handler said she knew what she said was wrong and that she “just tried to gloss over it.” However, her sister demanded an explanation.

“She said, ‘No. I need you to tell me what you think is happening between the sun and the moon,'” Handler said. “And I was like, ‘Honestly, I just assumed when the sun went down, it popped back up as the moon.”

The star continued, “The man riding the elephant spoke no English and went, ‘Pfft!’ And he’s just like, ‘Another dumb American, you know?”