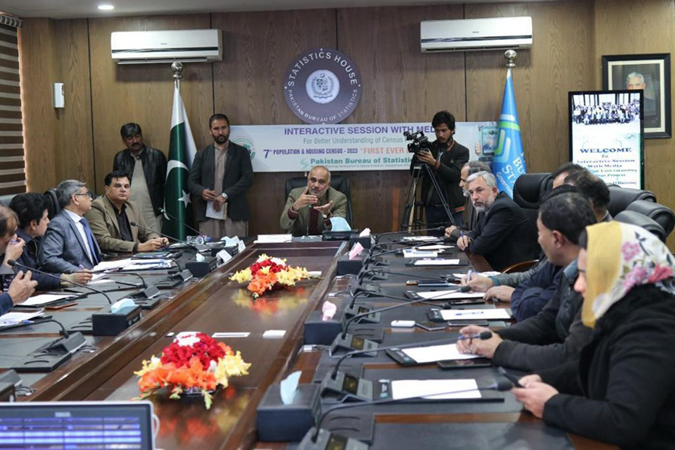 Chief Statistician, Dr. Naeem uz Zafar, welcomed all the participants and highlighted the importance of the first ever digital census in the country. He emphasized that media plays a very vital role in transmitting the true information to the general public and this interactive session will help the media persons to understand and communicate salient features of the 7th population and housing census. He also assured that PBS will keep interaction with media on regular basis during the whole census exercise.

Member (Support Services/Resource management), Mr. Muhammad Sarwar Gondal, in his presentation emphasized that the main purpose of census is data collection for evidence based Policy and Planning. He further added that on the recommendations of the CCI, PBS has designed a system of conducting first ever Digital Census with the consensus of all the stakeholders. Latest digital technology has been used in this census which includes geo tagging of structures, swift data collection through specifically designed Tablets, centralized role based monitoring and management system, real time dashboards, and rapid availability of results. The participants were informed that PBS has hired 121,000 field enumerators from provincial governments for this task. Across the country, 992 training centers have been established to impart training to these field enumerators and second round of training is underway in these centers. In 628 Tehsils, 495 census support centers have been established for the technical support of the district administration in the field. The participants were also informed that PBS has already tested all the softwares and hardware working in a pilot survey conducted in 33 districts which was conducted during 17th July to 4th August. All provincial governments have already been take on board on the digital census through seminars and workshops conducted in each province. During the session the concepts of self- enumeration, CATI (computer assisted telephonic interview) were also discussed and participants were informed that PBS is the first country in the region to implement these concepts in the population census. CATI will enable PBS to ensure coverage as well as quality of data collection during the field activity of census. This will be a replacement of the post enumeration survey at lesser cost and wider coverage. The whole process of self-enumeration, listing and enumeration will be completed in one and a half months.

This exercise will be the largest digital exercise of the region, which has been planned after taking guidelines from UN principals, lesson learnt from previous census experiences and study of world’s best practices in the world. Chief Statistician / Chief Census Commissioner PBS, Dr Naeem uz Zafar, thanked the media persons for attending the session and hoped that clarity in objectives, process and stakeholders’ engagement will help in conducting a transparent and credible census.