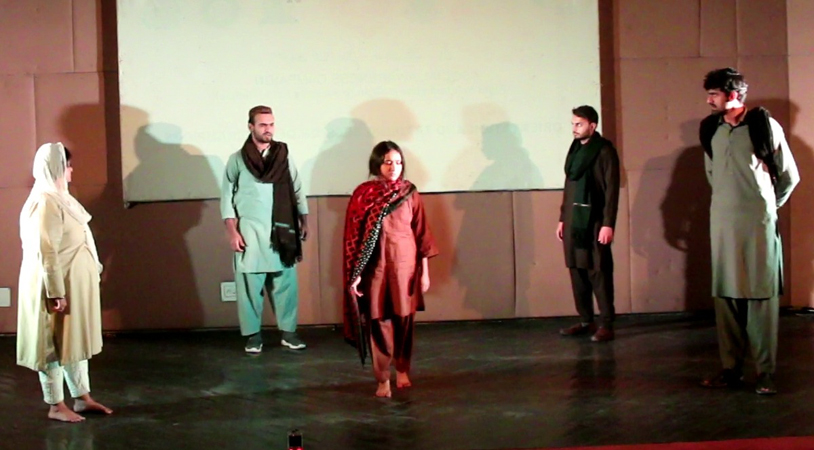 Promising new writing and acting talent was showcased by Ajoka Institute at a well-attended and well-organised event held at Alhamra on Thursday. The programme included new scripts developed by students of Ajoka’s Art of Writing students mentored by playwright Shahid Nadeem. The first script was titled “Toon Aho Aho Aakh ” by Danish Ali Khan, which told the story of a British Pakistani Muslim whose candid questions about the values and practices of his country of origin. In response, he is branded as a “kafir” and unpatriotic and forced to flee. However, it turns out that he is more patriotic and better Muslim than most. The story ended with Bulleh Shah’s verse: “People call you a kafir, you say Yes, I am”. The second story “Mind-blowing” by Sanawar Iqbal presents a psychological clinic where a weird doctor treats his patients in a very unusual way and everyone comes out singing his praise. In the end, it turns out that he was an imposter, he himself was a patient. The third script “Athri Queen” by Ayesha Javed was the story of a single mother forced to join a commercial theatre group and harassed by an indecent audience. She decides to take these lecherous harassers in a bold and clever way.

Both plays addressed the issues relating to women. “Dhee Raani” touched the negative attitudes towards female education and their right to participate in social life of the community as an equal partner. “Sharam Di Gal” addressed the tabooed subject of rape victims and the insensitive attitude of those who are supposed to prevent sexual crimes. The cast included: Nyle Imtiaz, Fizza Tirmizi, Aanish Khan, Qulzam Afzal, RAMEEZ, Arshad, Ghazi, Rai Ali and Hasnain Ali.

Ajoka Institute director while speaking on the occasion congratulated the students on their spirited and impressive performances. He also thanked Lahore Arts Council for their support in showcasing new talent.