‘Pathaan’ trailer is the butt of jokes 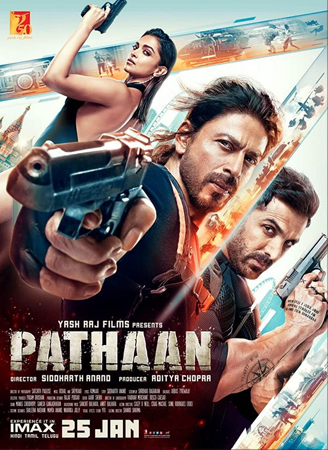 The trailer of upcoming Bollywood film ‘Pathaan’ was released and has become the butt of jokes because of its cringe visual effects and dialogues.

The trailer showed raw action between Khan as Pathaan, an agent of RAW, who ends his hiatus and Abraham as a lethal antagonist set to launch an attack on India.

Pathaan is also offered to join forces with Padukone – who appears with her blonde wig – to take over the antagonist, in order to save ‘Bharat Maa’.

As much as it thriller social media, many users could not stop laughing about what they it. Several users said it was a mashup of action sequences from Marvel Cinematic Universe films. They also found humour in absurd visual effects and dialogues.

‘Pathaan’ has been directed by Siddharth Anand who has also written the screenplay with Shridhar Raghavan, whereas, the patriotism-filled dialogues are penned by Abbas Tyrewala.

Filmmaker Aditya Chopra has bankrolled the project under his banner Yash Raj Films. The musician duo Vishal-Shekhar are the composers for the film.

‘Pathaan’ is slated to release simultaneously in Hindi, Tamil and Telugu versions on January 25.