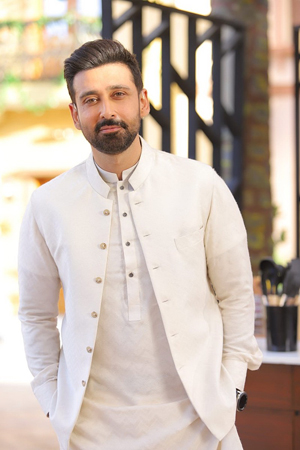 Actor Sami Khan expressed his displeasure over the viral video of money being showered at a wedding in Pakistan. A viral video of money showers at a recent wedding in Mandi Bahauddin, Pakistan is being widely circulated on social media and has invited flak from social users including celebrities. The clip from the wedding festivities sees people showering money notes from the rooftop of a house while masses are gathered around with fishnets to catch the money. The practice wasn’t acceptable to the netizens, given the waste of money, especially amid the ongoing crisis in the country. The snippet has now drawn the attention of actor Sami Khan as well, who expressed his displeasure over the immoral practice. The actor reshared the clip on his Instagram stories and wrote, “Yeh wohi mulk hai jahan aik ghareeb aadmi apnay bachon k liyay aatay ki line mein mar jata hai? (Is this the same country where a person recently died while struggling in a queue to get flour for his kids? Heights of callousness).”