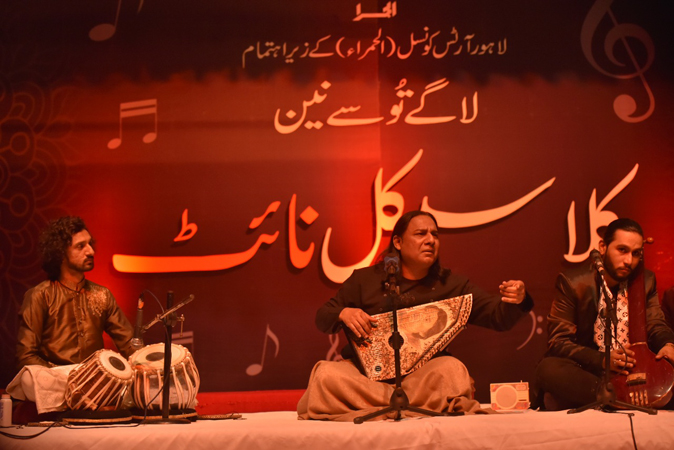 While in the sprinkled weather, the classical Raag and Sur warmed up the gathering.

The programme started with the National Anthem. After that, Ustad Shafqat Ali Khan performed Raag Darbari, which the audience applauded heartily. After that, Ustad presented the famous Sufi poet Khawaja Ghulam Fareed’s Kafi “Sanwal Mor Muharan,” which made the audience colossal applause. Ustad Shafaqat Ali Khan added to the great entertainment of the program by presenting Baba Bulhe Shah and other famous Kalaams. Chairmen BOG LAC Razi Ahmad said in his message that, seeing the public’s interest in classical music, Alhamra will continue to organise more such programmes for the people. On this occasion, Executive Director Alhamra Zulfiqar Ali Zulfi said that LAC has a prominent place in transferring classical music to the new generation. Zulfi further noted that our Eastern culture highly valued the Kafiyaan and all Sufi verses. In classical music, we have produced such big names who made the name of the country and nation brighter; through this evening, we salute all our classical Ustaad and singers, he added.