Dare to be free: Hareem Farooq 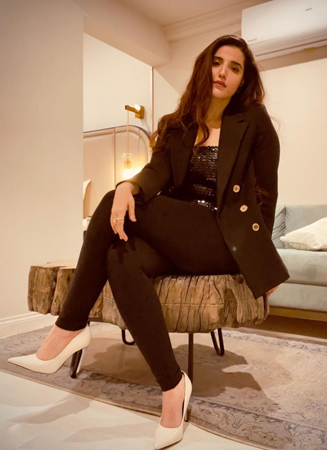 Actor Hareem Farooq sent an encouraging message to people through her latest pictures that are going viral on Instagram.

Hareem Farooq shared the viral pictures on her account. It showed her wearing all-black and matching shoes. She advised people to not allow the world to dominate them by being unapologetically beautiful.

“You know the box that the world tries to fit you in, take that box and use it as a stand for the mould your uniqueness fits best in,” she wrote.

“Dare to be free, be brave, be unique, be unapologetically and beautifully YOU. There is no other created like you, own that power, own yourself and then just see the magic happen

It is to be noted that the celebrity is quite active on social media platforms, especially Instagram. The celebrity leaves netizens mesmerized with stunning visuals of herself and her work. They go hit every time and receive thousands and sometimes millions of heart-warming reactions from fans and admirers.

Earlier, the pictures of Hareem Farooq in a peachy-nude sweater were a hit.

The acclaimed performer has impressed the audiences with her theatrics in the drama serial ‘Dosri Biwi’ and films including ‘Dobara Phir Se’ and ‘Parchi’ along with a cameo appearance in ‘Janaan.’