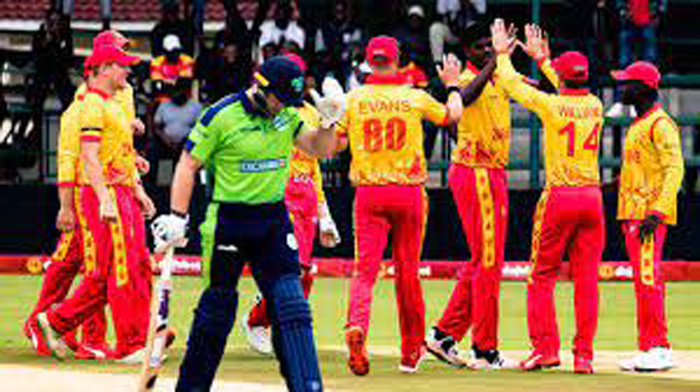 HARARE: Zimbabwe made it more tense than it needed to be, thanks in part to a mini fightback with the ball from Ireland, but nevertheless they secured a relatively comfortable five-wicket victory in the first T20 international in Harare on Thursday. In the last 12 months, Ireland have historically struggled after experiencing big gaps between series, most likely due to a lack of quality game time; the first T20 last year against India and the opening defeat of the T20 World Cup spring to mind as recent examples. Given Zimbabwe are in the midst of their domestic season and Ireland have been confined largely to indoor training in North County CC, perhaps that trend continuing on Thursday was not altogether unpredictable. With two debutants in the top three, Ross Adair and Stephen Doheny, replacing Paul Stirling and Lorcan Tucker who are playing franchise cricket, Ireland got off to a slow start with the bat. Only three players reached double figures, Gareth Delany top scoring with 24, as they were bowled out for just 114.

In response, Sean Williams anchored the chase with 34 as Zimbabwe ultimately coasted home despite two wickets for Harry Tector on his return to bowling. Zimbabwe won the toss and asked Ireland to bat. Ross Adair started nicely with a flick off his pads to the boundary but struggled with the heavy lengths on offer to him. He was dismissed when charging down the wicket, looking to get on the front foot, only to play the wrong line and see his stumps disturbed by Richard Ngarava. Skipper Andrew Balbirnie joined him not long after carving Tendai Chatara’s rank short ball straight to point. Doheny looked to rebuild, adjusting to the back of a length deliveries well when carving two boundaries over the offside on the back foot. He too perished, though, when Brad Evans pushed his length up, getting one to swing and take the outside edge. From there, spin largely took over. Ireland found scoring off the slow stuff easier, Curtis Campher pulling out his favoured reverse sweep, but wickets continued to tumble as a pair of Ryan Burl googlies bowled Tector and George Dockrell, while a Wellington Masakadza arm ball got Campher to nick off. Burl and Masakadza added further wickets before Ngarava and Chatara returned to clean up the tail, Ireland failing to bat their allotted overs despite Delany’s attempted fight back with a pair of boundaries over the offside.