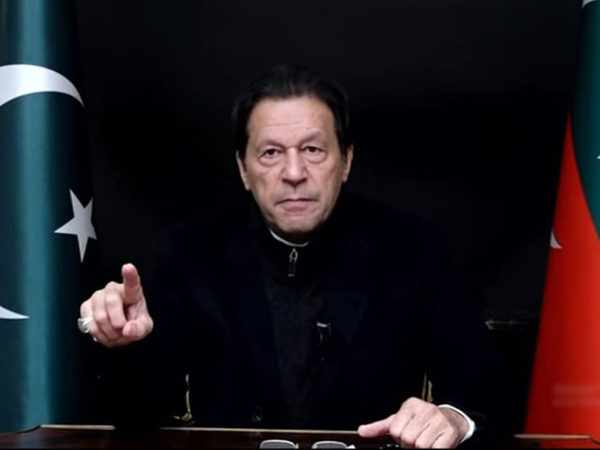 Pakistan Tehreek-e-Insaf (PTI) Chairman Imran Khan on Wednesday said his party members are being coerced into believing that the former prime minister has no political future as he has been marked with a ‘red line’, a private TV channel reported.

Speaking to members of the PTI’s parliamentary party in Punjab via video link, the party chairman said that only fools could say such things as only the people have the power to draw such lines.

“It is being said that there is no future for PTI or Imran Khan. We have marked a red line on Imran Khan. People are being scared into believing that it is now ‘minus-Imran’ and that he has no future whatsoever,” Khan told party members. “Only foolish people can say things like these. Neither do they understand politics, nor have they studied history. The Pakistani people are the heirs of this nation, and only they can decide to put a red line on anyone,” he said.

He said that huge sums of money were being offered to ‘buy’ the loyalties of PTI lawmakers. “Our members of parliament are being pressurised. I met our tigers from Muzaffargarh. They told me how Rs1.25 billion were offered in an attempt to ‘buy the conscience’ of five MPAs,” he said.

Imran Khan said he foresaw his party’s victory in the next polls – be it general or by-elections – despite “political engineering”. “No matter how much political engineering you resort to, the results will be the same as the by-elections,” the PTI chief said while speaking to Punjab’s parliamentary party, but refrained from disclosing the names of people who were behind the act.

Khan said the PTI would be giving up both the assemblies – of Khyber Pakhtunkhwa and Punjab – and the party will try to hold elections in the provinces. “Once we head into the elections, we will win with a majority. When we have the majority, we will take decisions [without pressure],” the PTI chief said. Khan also said that a decision would be made in the next couple of days regarding PTI’s next move, and said that the party would be successful in both provinces. Asserting that the victory target the PTI had envisioned was not far, the PTI chief said that an independent member of the provincial assembly (MPA), Bilal Warraich, had joined PTI. Khan further criticised the leaders of the Pakistan Democratic Movement (PDM) and alleged that ever since the multi-party alliance had assumed power, they were focused on ending their corruption cases and getting NROs.

He accused the PDM leader of not focusing on increasing the country’s exports and said that the PTI government was being falsely accused of weakening the economy. Whenever the PML-N government leaves,” Khan said, “the economy defaults as in 2018 and 1999”. The former PM criticised the expenses incurred at the Geneva moot, and referred to it as merely “begging”. He also slammed the current government’s economic policies, saying that these policies would only ruin the economy further, and lead to an additional burden of inflation on the masses. The PTI chief then addressed the judiciary of the county and asked “do we not have any rights?” “We want to dissolve our assemblies in a fair and legal way, but attempts are being made at halting the elections, which is a democratic process because PDM leaders are scared of the elections.” Referring to the day he was attacked, Khan said that he had called off his “Azaadi March” simply because he knew it would have ended in chaos, but “when have we ever resolved to violence?” he asked. “I was aware that I would be a target during the long march, but when we arrived in Wazirabad, there was no police,” he said.