California-Punjab accord hailed as milestone in Pak-US ties 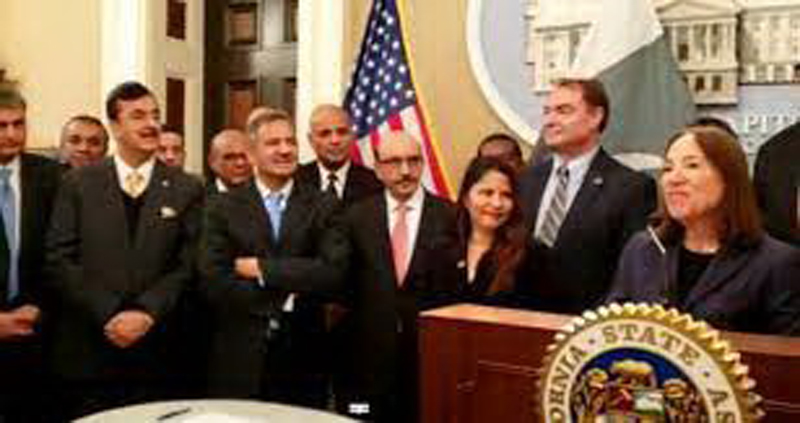 Speakers at a reception in Sacramento, California, hosted for a visiting Pakistani delegation, said Tuesday that the sister province agreement between California and Punjab marked a significant development towards strengthening US-Pakistan relations.

In his remarks, Pakistan’s Ambassador to the United States Masood Khan called it an important milestone in strengthening the linkages between California and the largest populated province of Pakistan that would bolster US-Pak ties. The reception, held at the governor’s mansion to celebrate the landmark accord, was attended, among others, by the Lieutenant Governor of California, the Speaker and a large number of California State Assembly members along with Pakistani-American community leaders.

Senator Gilani expressed the hope that the agreement would be instrumental in tapping the untapped potential existing between the two countries. “Pakistan considers the US as its close ally, and hopes to further strengthen its bilateral relations with the US through frequent parliamentary and people-to-people exchanges,” he said.

Dr Asif Mahmood, a prominent Pakistani-American activist, who recently contested the election from California for the US House of Representatives, played a pivotal role in the establishment of a sister province relationship between California and Punjab, a press release issued by the Pakistani embassy said. He has been working with the California assembly’s leadership and lawmakers to gather support for establishing the California-Punjab partnership, it was pointed out. California State Assembly member Chris Holden, a veteran parliamentarian, piloted the resolution and developed bi-partisan consensus for its passage.

Addressing the gathering, Lieutenant Governor of California Eleni Kounalakis said that the agreement would help the two sides to expand and solidify ties between California and Punjab. She said the state of California fully realizes the potential of cooperation between the two critically important provinces. She also acknowledged the important role of the Pakistani-American community of Punjabi descent in the economic development of California. “They are contributing a lot in diverse sectors especially agriculture, health, IT and entrepreneurship,” Ms. Kounalakis said.

Assembly member Chris Holden, in his remarks, stated that people-to-people contacts and parliamentary exchanges are vital to ensure an enduring and long-term relationship.

Ambassador Masood Khan paid rich tribute to assembly member Chris Holden for linking California and Punjab and working hard for the adoption of the resolution at the California assembly. He also thanked lawmakers for their bi-partisan support to signing of the historic agreement.

Masood Khan said that Pak-US relations were on an ascending curve. This, he observed, was the most appropriate time for signing the agreement. “There are natural complementaries between Pakistan and the United States, particularly Punjab and California,” he said. Referring to the recent spurt in Pak-US bilateral trade volume especially IT services exports to the United States, amounting to $1.4 billion, the Ambassador said that 80% of IT services from Pakistan were being exported to California.

“The recent spike in exports particularly in the IT sector is satisfactory yet there exists a huge potential to enhance them to $5 billion in the near future. The agreement today would pave the way for realizing the existing potential,” he added. The ambassador underscored the need for promoting university-to-university partnerships that he said would provide an underpinning to cement this relationship. Pakistani delegation also invited the leadership of California to visit Pakistan which they gladly accepted. A bipartisan delegation is expected to visit Pakistan in the near future. Earlier, Yusuf Raza Gilani visited California State University Northridge and the University of California Davis to discuss educational cooperation between Pakistan and the United States, especially in the field of agriculture.