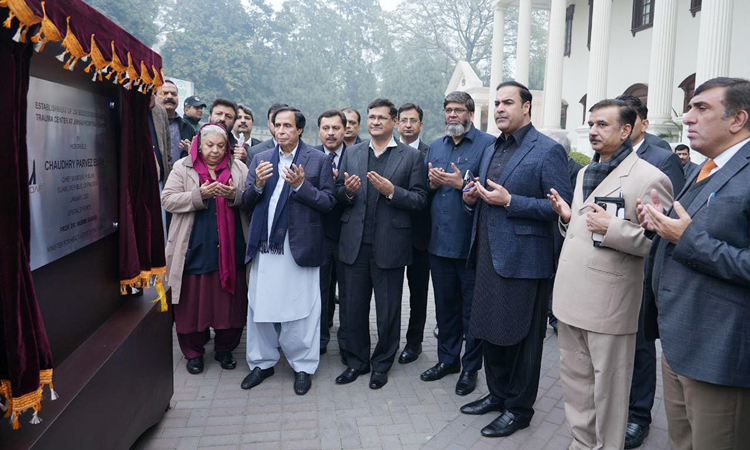 Chief Minister Punjab Chaudhry Parvez Elahi and MNA Hussain Elahi met with Chairman PTI Imran Khan at Zaman Park today in which political situation and consultations with regard to vote of confidence took place. Chairman PTI Imran Khan on this occasion denounced that Faran Khan was taken to be an Indian agent and was subjected to a barbaric torture. Imran Khan queried that what is the crime committed by a patriotic Pakistani adding that it is a question mark for the whole nation. Imran Khan also condemned the steps to include CM Parvez Elahi and his family members into ‘No Fly List’ adding that the federal government has become blind in taking political revenge. The imported government flagrantly flouted the constitution and law of the country. The federal government’s conspiracy to topple Punjab government will be foiled. PTI and PML-Q members are united and the federal ministers will face humiliation. Chief Minister Parvez Elahi did not indulge into doing any vindictive activity in politics nor believes in doing so. May it be inflicting torture on Faran Khan or kidnapping people. Chairman PTI Imran Khan stated that every conspiracy of Shehbaz Sharif and Rana Sanaullah will meet with failure. Failures are written in the destiny of Shehbaz Sharif and Rana Sanaullah Insha’Allah. Imran Khan censured that the federal government is making worst vindictive activities over their lust for power.

In addition to allocating beds for accidents and other emergencies, 24 beds will be allocated for cardiac emergencies, and 48 for surgical and allied emergencies. The trauma center and a new emergency were required to deal with the rush of patients while diagnostic services, including cath lab, pathology, radiology and pharmacy, will also be available in the new emergency, the CM said and mentioned that the lift, ramp, wheelchair, stretcher and other facilities were being provided for the convenience of patients and their attendants. The seven-storey emergency block and trauma center project would be completed within the stipulated period and all the medicines will be provided free of cost in the emergency, he added and appreciated that Dr Yasmin Rashid and her team were burning the midnight oil to provide quality healthcare facilities to the patients. Provincial Ministers Mohsin Leghari, Latif Nazar, Principal Secretary to CM Muhammad Khan Bhatti, Finance Secretary Mujahid Sherdil, CEO IDAP, DG Protocol, DGPR Rao Parvez Akhtar, Principal Allama Iqbal Medical College, MS Jinnah Hospital, Chairman BoM Allama Iqbal Medical College, member BoM Barrister Sahibzada Muzaffar, Prof Masood Rashid and others were also present. Former federal minister and PTI leader Farrukh Habib called on Chief Minister Punjab Chaudhry Parvez Elahi at his office and discussed matters of mutual interest.

The CM noted that the alliance with the PTI was getting stronger with every passing moment and added that the designs of the propagandists would be frustrated. Politics is like worshipping but some elements have turned it into a business, he said and added that the nation was watching how deals of conscience were being made. He asserted that the government was more than determined to counter the unconstitutional tactics of the opposition. PML-N was following the agenda of anarchy while we advanced a goal of public service, he added and maintained that every city has been made part of the development process. No area would be deprived of development, he concluded.

Farrukh Habib said that the PDM-led government has snatched daily food items from the people. The imported government was, now, taxing breathing on the dictates of the IMF, he said and appreciated the steps taken by the Punjab government to provide relief to the common man. Principal Secretary to CM Muhammad Khan Bhatti was also present.

Chief Minister Punjab Chaudhry Parvez Elahi has expressed a deep sense of sorrow and grief over the death of veteran actor and comedian Majid Jahangir and extended sympathies to the bereaved family. The CM said that Majid Jahangir’s popular TV drama ‘Fifty Fifty’ is still remembered by the fans. Majid Jahangir commanded ‘Fifty Fifty’ with his unique acting and the history of comedy cannot be complete without Majid Jahangir, he added.

Chief Minister Punjab Chaudhry Parvez Elahi said that free online IT courses training will be imparted to ten lac youths for getting self-employment. The youth after getting online platform courses can earn lacs of rupees by sitting at their homes. Memorandum of Understanding (MoU) was signed between Punjab Information Technology Board and Re-Skills Malaysian Company at CM office under which the youths of Punjab will be imparted free online IT courses training. Chief Minister Punjab Chaudhry Parvez Elahi graced the MoU signing ceremony as a chief guest. Chairman Punjab Information Technology Board Syed Bilal Haider and Chief Executive Officer Re-Skills Malaysian Company Mr. Tan Ting Jin singed the MoU. CM while appreciating the MoU stated that lacs of self-employment opportunities will be generated through online training courses. The youths from sixteen to thirty years of age will be given free of cost online training. The Malaysian company will provide technical grant (free subscriptions) to the Punjab government which costs 12 million dollars to impart training to the youths free of cost. Rs. 3 billion have been saved in the cost of online training. CM stated that youths will be provided online training facility for self-employment with the cooperation of Re-Skills Malaysian Company adding that the youths will have free access to premium learning accounts up to one year.

CM underscored that the youths by getting online training through online professional courses can enhance their incomes by getting self-employment and can earn lacs of rupees. The youths having smart phones can get training easily through this platform and can enhance their incomes. CM outlined that we would provide every kind of facility to the local and international technology companies in this regard. Special Assistant to CM on Informational Technology Dr. Arslan Khalid apprised that Punjab government is going to launch Digital Skills-2 programme in which high-level technology training for the university youths is being organized. Syed Bilal Haider stated that Pakistan stands at forth position in the freelancing ranking at the international level.