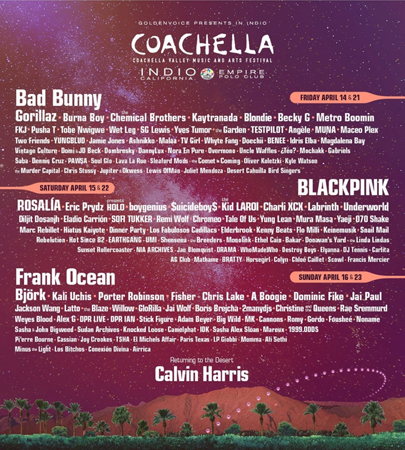 Ali Sethi – the voice behind global chart-topper ‘Pasoori’ – is all set to serenade the Coachella music and arts festival.

After making the world dance to peppy beats and quirky lyrics of the chart-topping banger ‘Pasoori’, Ali Sethi is now set to make the attendees at the annual festival rock to his songs, the singer confirmed on social media.

The performer shared the news on his official Insta handle with a line-up poster for Coachella 2023 and wrote, “AAJAAO SAARAY, (come all).”

This year, the arts festival will return on the weekends of April 14-16, April 21-23 and Sethi has been lined up to perform on both Sundays.

The festival, headlined by the K-Pop band BLACKPINK, rapper Bad Bunny and American musician Frank Ocean, will also feature the likes of Diljit Dosanjh, Gorillaz, Rosalia, Bjork and many more.

It is certainly a proud moment for the country and the vocalist himself, who was congratulated by several celebrities from the fraternity for the feat.

About his records-smashing number with newbie Shae Gill, ‘Pasoori’ was a global sensation of 2022 with millions of YouTube views and Spotify streams, in addition to countless renditions and reel recreations across the globe. Moreover, the catchy track also topped Google Search in 2022, surpassing the K-Pop chart-topper ‘Butter’ by BTS.

It is pertinent to mention here that last year Brooklyn-based Grammy-winning singer, Arooj Aftab became the first-ever Pakistani performer to be lined up for the prestigious music and art festival.