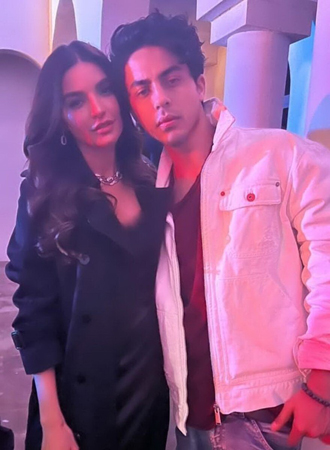 Actor Sadia Khan and Aryan Khan were spotted together at a New Year’s Eve party in Dubai, which led to rumours about the two dating.

However, Sadia Khan denied these rumours in an interview with City Times, stating, “It’s strange how people are making up stories about myself and Aryan without knowing the full picture. There needs to be a limit to what is considered news.”

The “Khuda Aur Mohabbat” actor also added, “This doesn’t mean that we are dating. I am not the only one who took a picture with Aryan either; there were a few other people who clicked pictures, and they also uploaded them, but somehow I am the one whose picture is floating around.”

Sadia went on to say a few words in praise of Aryan, as she said, “I would say that Aryan is a very sweet and an extremely well-mannered boy. So, please stop all these baseless rumours about us. Love and respect.”

She also took to her Instagram handle to shut down the rumours.