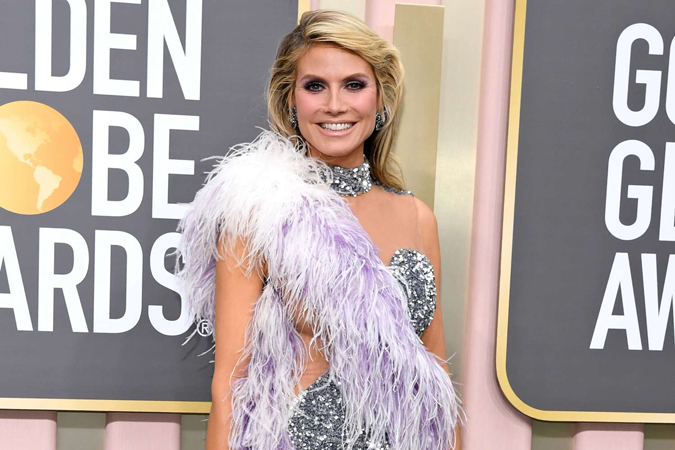 The stars were back on Tuesday for the Golden Globes’ return to television, walking a soggy greyish carpet in relatively predictable looks – with a few notable exceptions. Heidi Klum, not long after her Halloween worm appearance, showed up in a sky-high silver sparkler with a feathery embellishment over one shoulder as the crowd was treated to a reprieve from rain that has plagued Southern California.

Also in silver? Angela Bassett, along with Jessica Chastain in a sparkly body hugger done in a checkerboard and starburst design.

There were lots of black suits and tuxedoes. Eddie Redmayne showed up in black and brown trim with a huge silk rosette on one lapel, courtesy of Valentino. Another standout: Colman Domingo in a black tux with sparkly jewel embellishment. Elvis, also known as Austin Butler, entered the building in a traditional black tux, while Andrew Garfield went for orange with an open collar on a black shirt underneath. Donald Glover was practically in PJs. His comfy robe shirt and relaxed trousers were white. His tux jacket was black. The look was Saint Laurent.

“I just want to be comfortable,” he said.

Sheryl Lee Ralph of “Abbott Elementary” in jewel-tone blue with chunky embellishment led the train parade in her high-neck look. It was by Aliétte. Viola Davis also opted for a jewel-tone, body-skimming blue.

Chloe Flower, who will perform a song during the show, went for a longer train in a white, lightly embellished number.

Niecy Nash-Betts wore a lovely deep purple gown with chunky sparkle, paired with a large-shouldered coat and long matching opera gloves. Both were done by Dolce & Gabbana. There was a healthy showing of golds, too, including an adorable 19-year-old Bailey Bass from “Avatar: The Way of Water” in a long look with a delicate pattern.

Michelle Williams wore an ethereal, ivory one-shoulder look trimmed in gold. Her ruffly look included a high-side slit. The women kept their jewels to a minimum. 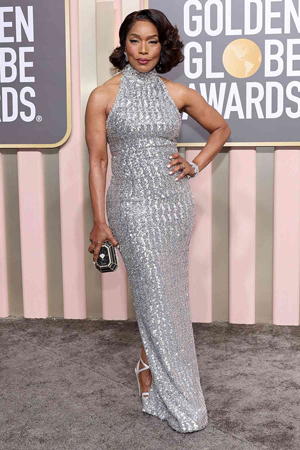 A pregnant Abby Elliott went for burnt orange with all-around sequins from Pamella Roland. Her sparkler had long blouson sleeves and a high neck.

Jenny Slate was in emerald green from Rodarte. She told E! of her slip dress with a large flower at the neck that she was aiming for “a woman who’s about to turn into a magical plant.” Among the standout looks was E! host Laverne Cox in a sexy goddess gown in blue and silver, her hair in a curly Old Hollywood bob. Her look was vintage John Galliano.

Anya Taylor-Joy went for a sunny yellow two-piece Dior look with a tiny bandeau top. Margot Robbie was dressed in pale pink Chanel adorned with beads and feathers, while Lily James went old school Hollywood in 50 meters of red fabric. Her look was custom Versace, a column dress with exaggerated hips and a strapless top that crossed at the waist.

Jenna Ortega also went for the crisscross look in a breezy, pleated copper colour. It was Gucci paired with necklaces by Tiffany & Co.

Sepideh Moafi, an Iranian American actress, wore a black sequined look with a high slit and huge red rosette at the hip. She worked on the look with Iranian designer Amir Taghi and the Haus of Milad. “The dress has many stories,” she told The Associated Press, “but the most important of which is this flower, which represents a blooming new Iran during this revolution.” She was referring to a monthslong wave of protests in Iran challenging the country’s ruling theocracy.

Jennifer Coolidge, Quinta Brunson, Jamie Lee Curtis, Natasha Lyonne. There was an abundance of black looks. Emma D’Arcy also wore black, an oversized trouser and skirt tuxedo combo – and another large lapel rosette – finished with indigo gloves. They wore heavy dark makeup with a single blue tear streak under one eye. “It wasn’t sustainable,” D’Arcy, who is nonbinary, told E! of being forced to present as a woman in the industry.