Literary magazine Takhleeq has something for everyone

* After the usual start of the magazine, Hamd-o-Naat presents the submissions of Syed Riaz Hussain Zaidi, Gulzar Bukhari and Dr Farhat Abbas 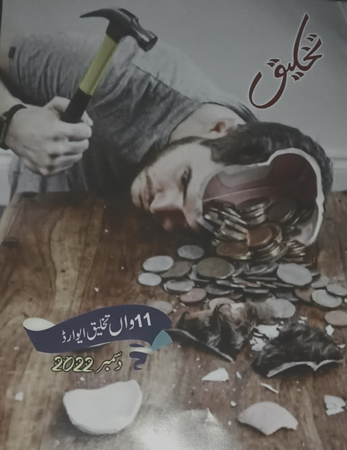 This issue of literary Magazine Takhleeq, December 2022 includes a corner for Azhar Javed, the founder of this literary magazine including Punjabi critical review by Asif Saqib on translation of his book ‘Buhut Dair Ho Gai’ by Hanif Bawa.

MD Malik has the honour of reading versions, the Punjabi version as was gifted by the author himself in 2004 and the translated version by the author’s son in 2022. In this issue of Takhleeq, eleventh Takhleeq Award was also announced. The lucky winner is Hanif Bawa hailing from the soil of Jhang for his works both in Urdu and Punjabi Languages. While complimenting the lucky winner, Dr. Haroon Ur Rasheed Tabassum states that this land has given many literary people to the world of Science and Literature like Dr. Wazir Agha, Majeed Amjad, Dr. Abbdus Salam, Shair Azal Jafri, Prof. Sadar Sayal, Sahibzada Riffat Sultan, Dr. Nasir Abbas Nayyar, Shafi Hamdam, Muhsin Manghiana, Ishtiaq Ahmad, Dr Mulla Khan Haidri, Pir Habib Ahmad, Talib Hussain Seyal, Azhar Javed and Habid Bawa. Dr. Ghafer Shahzad has contributed some information on how and what the children of notable intellectuals are doing now. The daughters of Faiz and the sons of Nasir Kazmi have done well to project their father’s works to the present generation through books and functions.

After the usual start of the magazine, Hamd-o-Naat presents the submissions of Syed Riaz Hussain Zaidi, Gulzar Bukhari and Dr. Farhat Abbas. Khawer Naeem Hashmi, a famous journalist and writer contributes the story of BG whose mother was supplier of extra girls to the producers for their films. The narrator BG’s mother was namely Nurjehan. Khawer Naeem met her or the first time in 1968 when his father Naeem Hashmi Saheb was producing a documentary ‘Muqadas Amanat’ in Bari Studios’ floor No. 05. Those were the busy days for film productions and Extra girls and boys were needed or dancing or fighting sequences. Many youngsters used to stand outside the studio main gates or any such possibility. The girls often used to become victims of studio employees who would uses them for unfair means and they used to end up in red light areas. BG shared a story of her mother once caught red handed with food left over food o the actors to take to her home for her hungry kids. Such stories expose the horrific side of film making in Lollywood.

Essays include a thought provoking culture of courts by Dr. Mubarak Ali titled ‘Darbari culture’. This culture emanated from the West where the King was given the status of God as the courtesans used to bend and touch his feet to show their obedience. Often the king would give these people titles to keep them happy and obedient to the Court. Gradually the culture of licking the feet of the boss travelled from Muhammad Taghluq in India to China and Turkey. The historian Ibn-e-Batuta is quoted that the King would keep the hanging man close by to announce the name of any dissident before he was beheaded such that his terror is kept alive. As the time passed this culture has taken deep routed place in our offices, homes and social groups wherein the people who keep on praising their bosses all the time to get undue favours. On another important matter as to who was the first Urdu, Prof. Seher Ansari digs the name of Mah Laqa Chanda Bai as the first poet in the subcontinent.

Section that includes short stories always intrigues the readers especially it is contributed by younger generation. A short story titled ‘Ta’afun’ (bad smell) by Hasnain Ahmad is referred to here which is contributed by a young writer and the theme is the murders and killing at the time of partition in 1947. It is important to remember the stories of that time when Hindus and Sikhs killed families’ o Muslims crossing over to the newly created Pakistan and vice versa. Scenes of a family taking refuge in farms on the sides of railway tracks has to run away as the family members witness stray dogs eating the dead bodies and are confronted with the bad smell of decaying bodies even when they reach this side of the borders. This story compels our younger generation to thank the Almighty or bestowing His blessings and bounties in the shape of this country and value this gift to us such we cherish our homeland and follow the line that no more hatred is created between various factions of the society today! The other short stories are contributed by Mahmud Qazi, Hanif Bawa, Azra Asghar, Waseem Jabraan and Sadia Naseer from Canada.

Ghazals and Nazms are covered in separate sections. Sabir Zafar’s line attracts that says ‘Tanhai Puche Anjuman Aarai Kaya Hui/Aur Anjuman Ko Yei Fikr Keh Tahai Kaya Hui’ (Loneliness asks as to where did the get-togethers vanish and the latter seeks as to where did the loneliness disappear) – Page 82. This reviewer’s submission of Pakistani sweet voice Munir Hussan appears in the section on music – Part 1. First paragraph of my essay on his contribution to music is reproduced here taken from my book Melody Singers 2 published by Sang-e-Meel Publications and published by the Daily Times on June 28 2016. “It is very difficult to spot tuneful singers. In my music journey one such singers I came across was Munir Hussain, a dark complexioned, short man with a beautiful voice that had a little tremor in it like that by Talat Mahmud in India. Both were termed as singers of blue mood, meaning thereby that both sang soft melodies with ease. Singer Saleem Raza and Munir Hussain ruled Pakistani Film Industry’s music scene in 1950s till mid-1960s. As a general rule, my sensitivities are always linked with a song for a particular singer as my first impression. As the luck would have it, both singers are remembered for Raag Bhagheshri based songs; Munir Hussain for the melody ‘Qarrar Lootene Waaley’ for the film ‘Saat Laakh’ (1957) penned by Saif uddin Saif and music by Rasheed Attre and Talat Mahmud singing ‘Hum Sei Aaya Na Gaya’ for the film ‘Daikh Kabira Roya’ with music by Madan Mohan. For these wonderful melodies, I don’t know whom to give more credit whether to singers, or to the respective music composers, or to the poets or to the Raag selected to compose these everlasting melodies. I think it is the combination that did it all. To my utter surprise Munir’s song was banned by Radio Pakistan for many years as it comprised lyrics of ill-will in frustration for the beloved but in a sophisticated manner. Santosh Kumar and Sabiha Khanum’s unrest was beautifully pictured in this song by Saif Saheb. Munir Hussain’s versatility got established when this song went on air. In his film career as background voice he sung about 217 songs for 163 Urdu and Punjabi films. Munir Hussain died on 27 September 1995. His singing career spread over 38 years. Since Munir belonged to a
music family with Rasheed Attre as his maternal uncle and Safdar Hussain as his maternal cousin; all from Rubabi
Clan, later however he started songs from the other established music composers
on merit especially from music composer A. Hameed”.