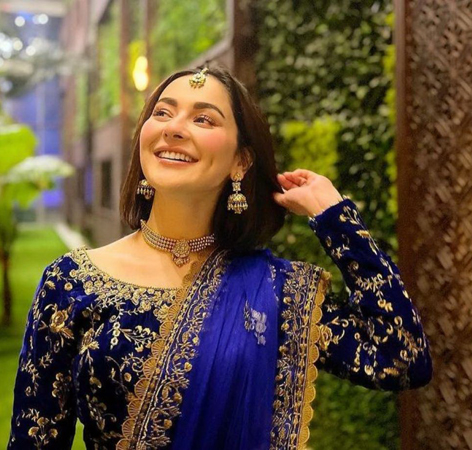 The charming and bubbly, everyone’s favourite Hania Aamir is a source of mood uplift even for Indian rapper Badshah. In one of his recent Instagram stories, the ‘Jugnu’ rapper confessed that he follows our very own starlet on Instagram, above all for her content and posts which instantly boosts the mood. It happened so, when the ‘Mere Humsafar’ star published a video of hers of the gram, trying to mimic some dialogues from the Netflix hit, ‘Emily in Paris’. The Indian rapper dropped a sweet comment on Aamir’s post which drew the attention of social users.

In reference to the same comment, one of his followers asked Badshah if he follows Hania Aamir on the social platform, to which he replied, “Yes, I follow her.”

Badshah also maintained that her personality comes across as a bright human being.

It is so heartwarming to witness this cross-border love between artists, isn’t it?

Meanwhile, on the work front, Hania Aamir is currently winning hearts in the drama serial ‘Mujhe Pyaar Hua Tha’, alongside A-list actors Wahaj Ali and Zaviyar Nauman. She plays the protagonist Maheer in the play.

Sidra Seher Imran has written the story of the drama, while Badar Mehmood directed it, under the production banner ‘Big Bang Entertainment’ of Fahad Mustafa and Ali Kazmi. The soul-soothing OST is the recreation by Baloch singer Kaifi Khali, of his chart-topper ‘Kahani Suno’.