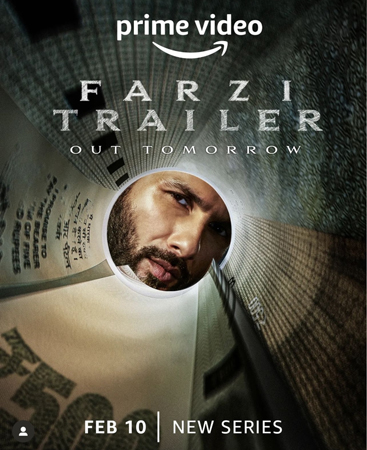 Previously, the makers of Farzi dropped the first look of Shahid Kapoor from the upcoming thriller series; the makers have now unveiled another motion poster revealing the looks of the other cast members.

The poster also features famous actors Kay Kay Menon, Raashii Khanna and Vijay Sethupathi apart from Shahid. In the small glimpse all the cast members can be seen standing in a line meanwhile the title of the show gets displayed towards the end.

The official Twitter handle of Amazon Prime dropped the motion poster along with a caption that read: “blurring the lines between Asli and Farzi from here on.”

Farzi, which is slated to release on February 10, is going to be eight episodes based crime-thriller drama directed by Raj and DK and written by Sita R Menon and Suman Kumar.

The story is set to revolve around a street artist who is focused on conning the system that favours the rich. The drama is no less going to be a cat and mouse chase between him and the law enforcement.