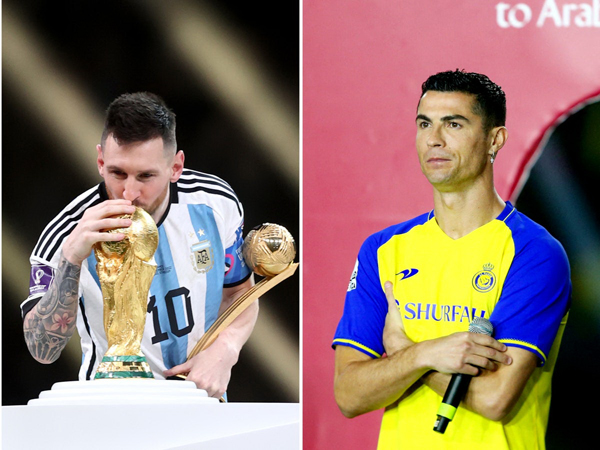 LONDON: Before leaving Manchester United, Cristiano Ronaldo was so intent on staying at the top level that he had actually taken it upon himself to directly speak to figures he knew at elite clubs. Few were interested. There was no offer that would have been acceptable to the Portuguese. He still had strong ideas about his own worth. Ronaldo’s plan was clearly to go to the World Cup and remind everyone what that worth is, before watching the offers flood back. Instead, reality intervened. That didn’t just apply to a tournament that saw a limited Ronaldo unable to perform to anything like the same level and eventually left on the bench in ignominy. It also applied to a debate that has dominated football culture for the last 15 years.

Lionel Messi has done much more than win. He has shown there should never really have been a debate at all; that it was largely illusory, a product of social media and public relations. This isn’t to say the players didn’t feel it, or that Ronaldo didn’t push Messi on. It probably lifted both to greater heights. All of that was visible over the last decade. It’s just that Messi’s World Cup victory also made visible the reality of the gap between these two stars.

Ronaldo is clearly better than most footballers to have ever played the game, something which made such a historic goalscorer. But Messi is perhaps the purest footballer to have ever played, which made him so much more than a goalscorer. He is on that level above, where only Pele and Diego Maradona reside. That’s where the debate really was. This is what was so symbolic about this World Cup win, and the sense of completion. It was a great player fulfilling his career but also fulfilling all of his talent. Nothing was left out there, in a manner that is rare in sport. Very few stories compare, with arguably only Pele’s 1970 win and Muhammad Ali’s 1974 reclaiming of the heavyweight title on a similar narrative and global scale.

Like those two, Messi displayed a similarly transcendent ability to adapt his innate talent, reshaping his own game and the game itself. His World Cup featured so many vintage moments that also gave him and the world something new in a sensational greater glory. There was the scoring, since Messi ended with seven goals, the last of them a classic poacher’s strike from a move he had started. There were the clutch moments, like that in the final, but also the impossibly accurate strike against Mexico that revived Argentina’s entire campaign. One argument that has been put forward by a few people familiar with both stars is that, while Messi was always the better footballer, Ronaldo just had this superior will that ensured he didn’t suffer defeats in the same way.

No more. The image of the ashen-faced Messi enduring another humiliation — another major trophy eluding him — is gone, except to serve as mere set-up for the finest of comebacks. Few have dominated and defined a World Cup like this, driving a relatively moderate team to the highest level. That is the greatest will, at the ultimate moment. There were then the throwback Messi runs that themselves ran through this World Cup, especially that surge in the semi-final against Croatia.

Most tellingly, however, there was that divine pass for Nahuel Molina to score against Netherlands. It was not that Messi put it in the only place he could to conjure a goal out of nothing. It was that, in an instant and on the move, he had computed the optimum path to goal and followed in the most exquisitely economical manner. This was precisely why there was really never been a debate at all, and what has been made so apparent as both players come into the last half of their 30s. Messi’s greatness has always been about that talent, above all else. Ronaldo obviously has talent but the real difference has been how his physical prowess has maximised that. When you think of his great moments, they aren’t usually about deftness or technique but power, agility and movement. Even his finishing, which became close to flawless, became as much about his timing.

Ever since Ronaldo’s physical attributes started to fade, though, so has his effect. Messi, put bluntly, could still do so much more with a football. It is why it is easy to imagine spraying passes as his own movement wanes. He will still be able to control a football to a level superior to anyone other than maybe Maradona and Pele. That was always evident, but this last period has made it an unavoidable truth. One response might be that Ronaldo is almost 38 and Messi 35, but it’s the same if you take it back two and a half years. In the autumn of 2020, the Portuguese had started a campaign that marked the end of Juventus’ nine-year sequence of Serie A titles. The argument was already raging about how he provided goals but took away from the team’s collective threat. There’s now a different argument, that Ronaldo’s signing was one of the worst in modern football history given its negative effect on Juventus. The immense expense ensured the club couldn’t reshape or restructure, anchoring them to a system built for him that weighed them down.

At the same age, Messi was ascending to the greatest glory. It’s not known if Ronaldo watched the World Cup final. It’s still difficult not to think it influenced his decision to join Al-Nassr in some way. With no club of appropriate status offering an opportunity to restore his reputation and soothe his ego, he had to go for the next best thing you can gloat about. That’s the biggest financial contract, as offered by Al-Nassr. It still articulates one of many contrasts between these two, that have been conditioned by their abilities, personalities and choices. Messi has just enjoyed an achievement that is priceless. Ronaldo must try and portray a price as an achievement.

“I had offers from Brazil, Portugal, America, Australia,” he said. “But I gave my word to Al-Nassr.” They gave him a number. Other arguments will be made about legacy, about spreading the game. “I gave my word to this club to develop not only football but other parts of this amazing country,” Ronaldo went on. “I want to give a different vision of this club and country.”

Far from enhancing his legacy, though, it could damage it. Saudi Arabia already has a fervent football culture, after all. That could be seen at the World Cup. It’s not like he’s developing a new culture, nor is it like the wider game cares about its growth in any one country. There are questions over how much Ronaldo actually cares, too, given he only agreed to this deal at this late stage and at this kind of cost. There is also the moral cost. “Al-Nassr’s signing of Cristiano Ronaldo fits into a wider pattern of sportswashing in Saudi Arabia,” says Dana Ahmed, Amnesty Internal’s Middle East Researcher. “It is highly likely that the Saudi authorities will promote Ronaldo’s presence in the country as a means of distracting from the country’s appalling human rights record.”

It feels even likelier he will be used as an ambassador for the country’s 2030 World Cup bid. He may even see Messi on television doing similar, given the Argentine’s role with Saudi tourism. An irony to this is that it still arguably isn’t as bad as Messi’s own use by Qatar, through Paris Saint-Germain. Whereas Ronaldo going to Saudi Arabia is a league attempting to superficially benefit from the afterglow of a faded star, projects like at the French club – or Newcastle United or Manchester City – are buying into the very fabric of the game. One is on the outside of the elite. One is at the very heart.

That is nevertheless where the two great rivals are now. Ronaldo is reduced to trying to find some meaning in a league far away from the top level, that brings more questions than attention. Few outside his online fanatics will seriously care about the goals. Messi has just returned to a favourite for the Champions League, where he has been celebrated for finally winning the World Cup. A last irony is that Ronaldo could still be at such a club. It just would have involved playing a more limited role on less money, albeit potentially still an influential one as a senior professional. There would have been serious merit in that. He could have done it for Manchester United.

It is as if he has been governed by a sense of denial about where he is at this point in his career, though. It is as if a delusion has surrounded him. Questions have to be asked about some of the advice he has received. There is similar with that bigger debate. Really, it is no shame that Ronaldo is on that second tier of greats, along with players like the Brazilian Ronaldo. It is part of what made him so good that he refused to accept that secondary status. The flip side is that it has also led to this rather sad ending, as Messi enjoys this best possible climax. As with Ronaldo’s calls to clubs, there’s little more worth saying.