‘EO’ — imagining the lives of other creatures 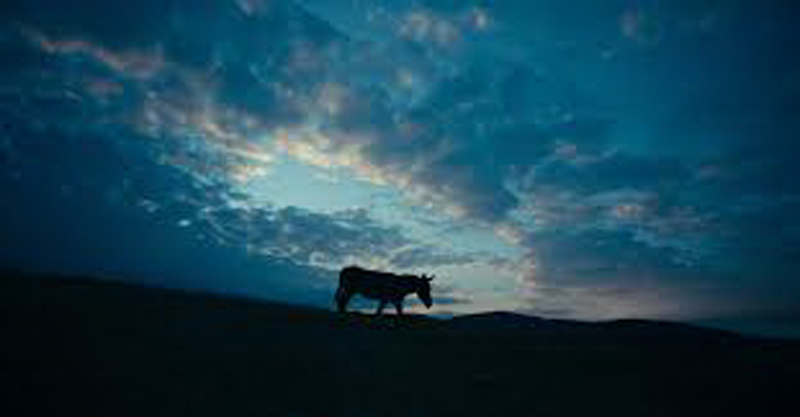 He has large ears, knobby knees, a softly rounded belly and dark, soft eyes that see the world in blunt terms. He is gentle, observant, generally quiet, and can run with surprising speed, which he does when his uneventful life takes a turn for the disastrous. His needs are basic, his life humble. He’s a faithful friend and a dutiful worker. He’s also a donkey.

EO is an astonishment and so too is this wild, boldly expressionistic movie that conveys the life of its largely silent protagonist with a bare minimum of dialogue. At this point, I should reassure you that EO doesn’t talk – he’s an animal, not a cartoon – though the few people in his life sometimes speak and yell and whisper, including to him. You understand their words and obviously so does EO, who will bob his head as if in answer, but his inner being and outer reality are expressed through the world he lives in, through pastoral landscapes and shadowy barns as well as in textured close-ups, jolts of angry color, frenzied edits and gracefully sensitive camerawork that races, soars, occasionally lurches and even trembles.

This is the first movie that the 84-year-old Polish director Jerzy Skolimowski has made in seven years, a period that seems to have fired up his imagination beautifully. Written by him and his wife, Ewa Piaskowska, “EO” has a streamlined story that, in its basic outline, adheres to the hero’s journey only to deviate drastically from that template. In short, EO sets off on an adventure, enters a realm of near-supernatural wonder, encounters fabulous and less so forces, experiences challenges and temptations. He also meets Isabelle Huppert in an Italian villa, though she ignores him. His journey is strange, absurd, exhilarating and terrifying.

It begins in a circus and ends in the abyss. In between, EO journeys from Poland to Italy through woods and streams, down underground passages and across city squares, encountering a range of people, some kind, others monstrous. He also comes across a menagerie of other creatures, including a slithering toad, a watchful owl and a soulfully howling wolf in a dreamy nocturnal scene that turns into a nightmare when unseen hunters begin shooting. At another point, while he’s being transported by truck, EO watches a herd of majestic horses gallop across a field; in a particularly grim scene, he lands in a fur farm filled with cages of terrified foxes whose cries are silenced by a lethal electronic prod.

“EO” recalls other animal adventures, like “Black Beauty,” Anna Sewell’s heartbreaker about a horse, but Skolimowski’s touchstone here is “Au Hasard Balthazar,” Robert Bresson’s sublime 1966 film about a donkey who is loved, brutalized and eventually dies in a state of grace. Bresson once said of his donkey that he “has in his life the same stages as does a man, that is to say, childhood, caresses; maturity, work; talent, genius in the middle of life; and the analytical period that precedes death.” I’m uncertain about EO’s analytical period, but he too is caressed and worked. He’s intelligent and, importantly, he has feelings, especially for Kasandra, a young performer who uses him in an animal act in a small Polish circus. She loves him, but also betrays him.

That EO feels may seem unremarkable, particularly given all the chattering, wisecracking animals that populate mainstream children’s movies. In most of these entertainments, though, the animals primarily come across as people in cutesy, bowdlerized animal drag. In this calculus, wagging tails are acceptable, but not so those other unruly, messy and embarrassing body parts. The Disneyfication of the natural world may have had a salutary effect on generations of filmgoers, encouraging them to see other creatures as more than threats to be contained and as something other than tonight’s dinner, but that’s only because movies tend to turn animals into humans.

Skolimowski, by contrast, consistently emphasizes the animality of EO and, by extension, the donkey’s essential un-knowableness and mystery. Although EO is repeatedly shown in long shot, say, when trotting over a ridge or across a field, he is often shown in closer, more intimate views. Again and again, you see one of EO’s eyes in extreme close-up, so that they become darkly shimmering pools in the center of the frame, and you also see different sections of his handsome smoky-gray coat. In some shots, the camera focuses on a human hand as it smoothly caresses EO, allowing you to see – and nearly feel – the hairs on the donkey’s coat as they’re touched, how they gently shift, stand, quiver and resettle.

These close-ups have seemingly distinct yet finally harmonising consequences: They bring you close to EO, but they also underscore his differences, the integrity of his being. He walks on all fours and eats grass, is covered with thick hair rather than naked skin, and has a muzzle, a mane and clopping little hooves. Over and over, Skolimowski reminds you that EO is an animal, not a prop or a plushie, a comic contrivance or a child substitute. He is not human, and yet he is nevertheless a being with a sense of the world and he deserves a place in it. He also has, as Skolimowski repeatedly suggests, desires – EO yearns for Kasandra, green pastures, soft caresses, freedom.

As you may have guessed, EO’s life, alas, is not one of freedom and kindness, even if the movie overflows with both. Life is brutal for animals, EO included. Skolimowski isn’t scolding us or trying to punish us for EO’s fate. Rather, if anything, in this remarkable movie, he is inviting us to make the empathetic leap across species and consciousness, to look at the world we’ve made for ourselves and to see, really see, what we lose by treating other beings as lesser. We lose the world. Perhaps this sounds grim, but no movie that I’ve seen this year has moved me as deeply, made me feel as optimistic about cinema or engaged me with such intellectual vigor as “EO,” whose octogenarian genius auteur and all the donkeys who play EO – Hola, Tako, Marietta, Ettore, Rocco and Mela – deserve all the love and the carrots, too.