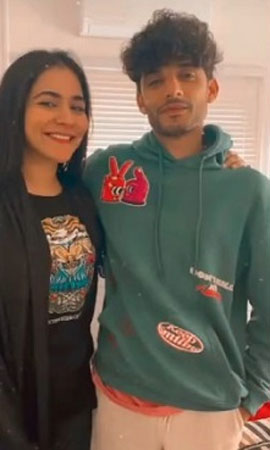 An Instagram video of the seasoned actor going viral on social media sees Malick enjoying a private concert of Baloch starlet at what seems like the lounge of her home.

Khalil put up his various melodious numbers including the chart-topper ‘Kahani Suno’ while Malick basks in his soulful voice. Both celebrities also posed for a picture together during their meeting.

The clip posted on her Instagram stories a day earlier was widely shared by several entertainment pages and netizens couldn’t help but go gaga about the song all over again.

It is pertinent to mention here Malick also shared a short reel of herself on Instagram earlier this week, with the same song playing in the background.

The close-up clip of the actor flaunting her stunning, glittery gold eye makeup was also captioned with the lyrics of the number, as she wrote, “Mujhey waqai pyaar hoa tha, (I was actually in love).”

Humaima Malick is one of the finest actors in the country. She started off as a model at a young age before foraying into acting. Apart from several Pakistani films and dramas, she also Bollywood title ‘Raja Natwarlal’ opposite Emraan Hashmi, in her filmography.

Meanwhile, Khalil has smashed records last year with both his tracks ‘Kahani Suno’ and ‘Coke Studio’ track ‘Kana Yaari’. It should be noted here that his hit number has also got a rendition from Aima Baig and is recreated as ‘Mujhe Pyaar Hua Tha’, OST for ARY Digital’s same-titled serial.