Sadia drops photo of herself with Aryan from New Year celebration 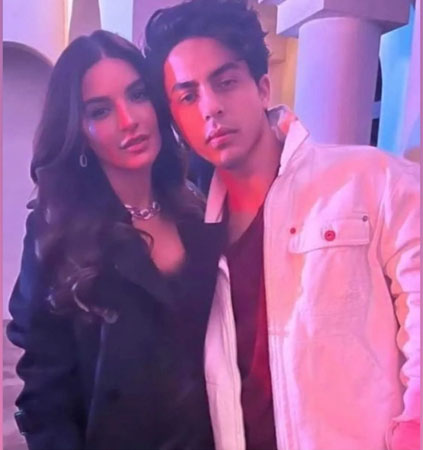 The Khuda Aur Mohabbat actor, 35, turned to her Instagram on Saturday and posted a picture with Aryan, 25, from the celebrations of New Year.

In the shared photo, Sadia can be seen wearing a black dress, while Aryan looks dapper in demin which he had paired with a maroon tee and he completed the look with white jacket.

Sadia captioned the Instagram story, “throwback to New Year’s Eve” along with the names of the duo.

Previously, the star kid sparked dating rumors with Bollywood dancer and actor Nora Fatehi, as they both posed with the same person in different pictures on New Year’s Eve.

Aryan Khan is gearing to make his Bollywood debut. However, it is being reported that he would be writing and directing the project instead of being on camera. The star kid had recently shared a picture on his Instagram with a script in hand that had his name. “Wrapped with the writing. . . can’t wait to say action.(sic)” the caption of the script read.

It is going to be a web series that will be produced by Red Chillies Entertainment.