Is Cher engaged to Alexander Edwards? 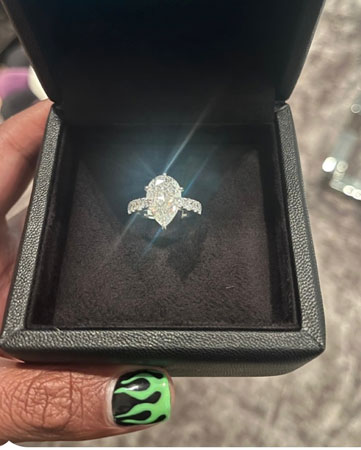 Save up all your tears: Cher’s diamond ring from Alexander “A.E.” Edwards is just a token of love.

On Christmas Day, the “Believe” singer sparked engagement rumors when she posted a photo of the music producer holding a ring, tweeting, “THERE R NO WORDS, ALEXANDER, A.E.”

Now, a source is setting the record straight on the present, exclusively telling E! News “they are not engaged,” and that the sparkler is “just a beautiful gift.”

Cher’s show-stopping Christmas gift from her boyfriend comes a little more than one month after the two were first spotted together during a cozy night out in West Hollywood. During the Nov. 2 outing, the two held hands as they made their way inside a restaurant.

Days later, the Grammy winner confirmed their budding romance when she tweeted a photo of Alexander-who shares three-year-old son Slash with ex Amber Rose – captioning it with a red heart emoji. But the declaration of love didn’t stop there. When a fan asked if Alexander was indeed her “new man,” Cher replied with a simple smiley face with hearts emoji. She responded in the same manner when another user tweeted, “Good for you. Enjoy what you’re doing and who you’re with and FK everyone else. You deserve to be happy.” And when a third wrote that the producer, 36, “better be treating you like the queen you are,” the 76-year-old confirmed that was exactly the case, writing, “LIKE A.”

And amid criticism of the pair’s 30-year age difference , the mom of two-who was married to Sonny Bono and to Gregg Allman – made it clear that she’s got him, babe. “I’m Not Defending us,” she tweeted on Nov. 6. “Haters are Gonna Hate…Doesn’t Matter That We’re Happy & Not Bothering Anyone.”