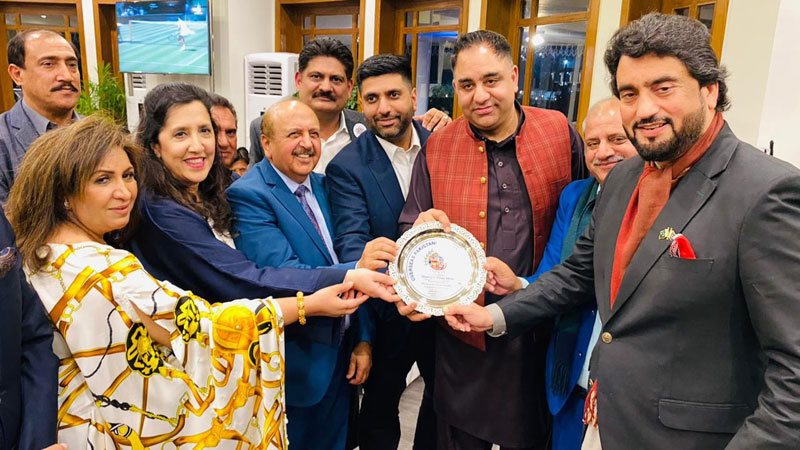 A number of prominent Members of the Parliament (MPs) of the United Kingdom and Pakistan on Thursday reiterated their pledge to continue supporting the freedom struggle of Kashmiris and vowed to leave no stone unturned to highlight the plight of Kashmiris under the Hindutva regime of India.

Addressing a large gathering of Overseas Pakistanis held with regard to the Right to Self-Determination Day being observed by the people of Jammu and Kashmir today, former Chairman of the Parliamentary Committee Shehryar Khan Afridi, Lord Qurban Hussain, Lord Wajid Hussain, MP of UK Imran Hussain, Shadow Minister UK Yasmin Dar and others vowed to carry forward their struggle for Kashmiris at a reception hosted by Shehryar Afridi and assisted by Overseas Pakistanis Global Foundation (OPGF).

Addressing the audience, Shehryar Khan Afridi said that Kashmir remains close to his heart and he would continue his struggle for the people of Jammu and Kashmir. “My forefathers from tribal areas of Khyber Pakhtunkhwa had joined the freedom struggle of Kashmir. They gave their sweat and blood for Kashmir cause. I would continue supporting the freedom movement in my capacity,” he said in his welcome address.

Lord Wajid Hussain said that Kashmir would remain top of his agenda and he would keep raising his voice for the Kashmiri people. Lauding the efforts of Shehryar Khan Afridi for the Kashmir cause, Lord Wajid Hussain said that Shehryar Afridi has always been ready to contribute to the cause of Kashmir. He said that Afridi’s support to the overseas Pakistanis was also unmatched. He said that the foreign remittances are a great contribution for Pakistan as overseas Pakistanis are always ready to sacrifice for the cause of Pakistan.

MP UK Imran Hussain said that the visit of the British MPs delegation to Pakistan had been very informative and inspiring and the delegates would be carrying back wonderful memories.

He praised the way Shehryar Afridi raised the issue of Kashmir at all global and local forums and served the Kashmir cause. He said that Kashmir struggle was a just cause and he would continue raising his voice at all international forums.

Lord Qurban Hussain said it was a pleasure to be among overseas Pakistanis working in so many countries. He said that the government of Pakistan would have to create conducive environment so that the next generations of the overseas Pakistanis should return to their homeland and keep sending foreign remittances.

Her said Kashmiris are under oppression and there is a need to work together to the cause of plebiscite to the people of Indian Illegally Occupied Jammu and Kashmir.

OPGF Chairman Chaudhry Zaheer Akhtar lauded the services of Shehryar Khan Afridi for Kashmir cause as well as the overseas Pakistanis. He said that the first convention of overseas Pakistanis had also been hosted by Shehryar Afridi last year in cooperation with the OPGF. He also introduced the OPGF members from UK, US, Spain and other parts of the world.