Will not take trust vote on governor’s ‘unlawful’ order: Elahi 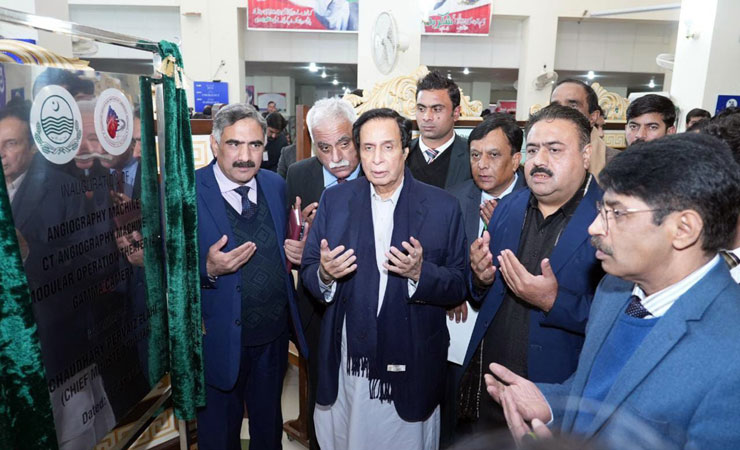 Chief Minister Punjab Chaudhry Parvez Elahi has said that a leader like Imran Khan will not born in Pakistan adding that Pakistan has got an honest leader like Imran Khan after Quaid-i-Azam for the first time. Pakistan will make a great progress under the dynamic leadership of Imran Khan InshaAllah. All inept PML-N leaders will lag behind and Shahbaz Sharif has been fully exposed. PML-N leaders do not know anything. CM was talking with the media representatives after the extension project of Wazirabad Institute of Cardiology and provision of latest machinery in the hospital. The Chief Minister stated that the order which the Governor of Punjab gave is unlawful adding that we do not accept this unlawful order of the Governor and there is no need to implement unlawful order of the Governor. CM apprised that the Punjab government has lifted the ban for making inductions in different departments of Punjab. CM informed that more than one lac employments will be given in coming few months. The cleanliness agreement with the Turkish Company OzPak has been made and now people will see improvements in the cleanliness situation of every city of the province. By the grace of Allah Almighty our government is strong. CM stated that he has been bestowed upon Chief Ministership by the Grace of Allah Almighty and with the prayers of the people. CM highlighted that he has devoted the position of Chief Minister for the welfare of the people. The Punjab government is working round the clock in order to elevate the quality of life of the poor people. CM denounced that Shahbaz Sharif and the PML-N government tried to the hilt to non-functionalize Chaudhry Parvez Elahi Institute of Cardiology Wazirabad but by the grace of Allah Almighty the hospital has now become functional. The children suffering from cardiac diseases will go undergo surgery in the Chaudhry Parvez Elahi Institute of Cardiology Wazirabad. Latest cancer treatment of cyberknife facility will be provided in Gujrat and all types of medicines will be provided free of cost in the hospital. The doctors of Wazirabad and Gujrat will be provided nice residential facilities. The induction of doctors is being made in Punjab and the health facilities are being stretched in the far- flung areas of the province according to the vision of Imran Khan. Family Health Clinic and a Trauma center will be established in Ghakhar. We are spending each and every moment to serve the masses from the onset of our government. We are bringing improvements in every sector. The people can avail more than 30 services by sitting at their homes through Go-Punjab App. A housing colony will be established for journalists in Gujranwala and the journalists of Wazirabad will also be accommodated in this Journalist Colony. Earlier, CM Punjab laid the foundation stone of the extension project of Chaudhry Parvez Elahi Institute of Cardiology Wazirabad and also inaugurated new block of paediatric cardiology. CM also inaugurated angiography machines and two modular operation theatres. CM was given a detailed briefing about the projects of Chaudhry Parvez Elahi Institute of Cardiology. CM apprised that Chaudhry Parvez Elahi Institute of Cardiology Wazirabad will be enhanced from 100 to 200 beds while in the second phase the number of beds will be increased to 500 beds in the Chaudhry Parvez Elahi Institute of Cardiology Wazirabad. The shortage of doctors especially anthologists and paramedical staff will be fulfilled forthwith.

Best sanitation system will be devised for every city: Chief Minister Punjab Chaudhry Parvez Elahi chaired a meeting to review the affairs of Lahore Waste Management Company (LWMC) at his office here on Thursday. The chief minister expressed satisfaction over resolving the financial issues as LWMC handed over a cheque of Rs.2.90 billion to Türkiye company Ozpak. The CM noted that Türkiye is counted among Pakistan’s best friends, adding that its investments in waste management and other sectors would be welcomed.

Lahore would be made a clean and orderly city, he said and added that waste management companies are being activated for cleaning big cities. The best sanitation system will be devised for every city of Punjab, he added.

The Ozpak delegation included Nizamettin Kocamese country head of Ozpak and Afzaal Shah project director. Provincial Minister Mian Mehmood-ur-Rasheed, Secretary Local Government Department Mubashar Hussain, CEO LWMC Ali Anan Qamar and Chairman CM Complaint Cell Zubair Khan were also present. Chief Minister Punjab Chaudhry Parvez Elahi has said that the United Nations Commission on India and Pakistan passed a resolution on Jan 5, 1949, guaranteeing a free and fair referendum in Jammu and Kashmir. In his message issued on Thursday, the CM said that the purpose of celebrating this day is to draw the attention of the international community to the promise of giving self-determination to oppressed Kashmiris. For the last 74 years, tyrannised Kashmiris have been waiting for the fulfilment of this promise.

The United Nations must honor its commitment made 74 years ago; he asserted and added that the right to self-determination is an important component of human dignity. Deviation from the resolutions on the right to self-determination is a negation of human freedom, the Universal Declaration of Human Rights and the United Nations human rights treaties, he said. Regrettably, India continues to blatantly violate this inalienable human right; the CM stated and noted that it is making a sinister attempt to undermine the identity of oppressed Kashmiris by changing their demographic structure.