People elected me, not THEM 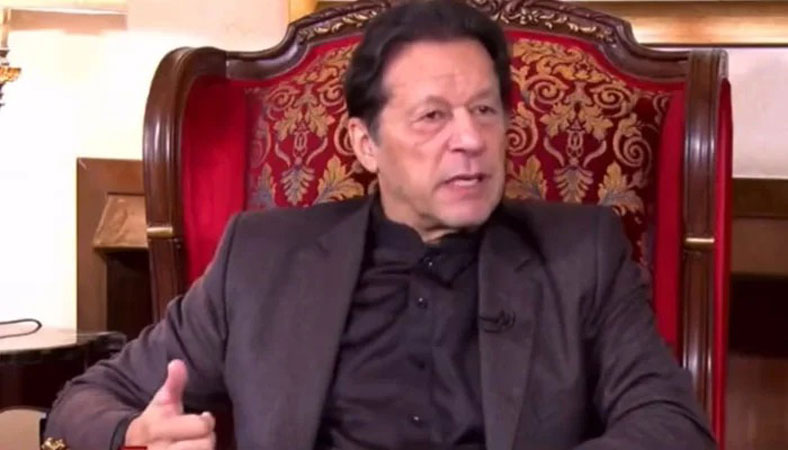 Former prime minister Imran Khan on Wednesday asserted that it were people who brought him into power in 2018, adding that Pakistan Tehreek-e-Insaaf (PTI) is the most popular political party in the country.

“Check any polls leading to 2018 elections and you will find that my party was the most popular,” Imran Khan told Daily Times in an exclusive interview. “If anything we were denied was the outright victory,” he maintained. “When opposition said the elections were manipulated, I offered to have any constituency analyzed. But, nobody took up that offer,” he said.

Imran Khan said in Pakistan, establishment actually means one man – the chief of army staff. “In a disciplined army, it is the chief who commands everything,” he said, adding that PTI wants a strong army but there must be a ‘balance of power’.

Imran Khan said previous army chief Gen (r) Bajwa did not think corruption to be an issue. “We thought NAB was independent. Almost all the cases against Sharifs and Zardari were filed before my government.

I just wanted those cases to reach their logical conclusion. I realized that it was the army chief who was controlling the NAB and was not allowing accountability to take its course,” he maintained. Imran Khan said army can play a very positive role as it is the only institution which is still intact in Pakistan. “They have played a very effective role during polio campaigns, Covid-19 handling and natural calamities like earthquakes and floods. Their role, however, must be under civilian supremacy as enshrined in the constitution,” he asserted. To a question, Imran Khan said his stance on Islamophobia is well documented. “I lived in the West long enough to realise that they do not understand Islam. They do not realise how deeply a Muslim is hurt when Holy Prophet (PBUH) is ridiculed as happened in Denmark and France. The West cannot distinguish between a Muslim and a radical Muslim. A man entered a mosque in New Zealand and gunned down 50 people. How could he distinguish who was radical and who wasn’t? The West needs to understand who we are and what our faith is about,” he said.

When asked about freedoms during his tenure, Imran Khan stated that his government was the most liberal as far as freedom of speech is concerned. “Only two incidents of journalists being picked up were recorded and we got them freed within hours. However, last nine months have been the worst in our entire history. Arshad Sharif was hounded out of the country and assassinated in Kenya. Social media activists were picked up, jailed and tortured. Journalists have left the country, some were jailed even. Senator Azam Swati was arrested and subjected to custodial torture,” he lamented.

To a question on Taliban and their ‘victory’ in Afghanistan, Imran Khan said Pakistan should have never joined the US war on terrorism. “We were dubbed collaborators by the TTP. At least 80,000 people died as TTP brought terror to entire Pakistan. I believe if we had stayed neutral in that conflict, we would have played a more positive role,” he said. “We share a long border with Afghanistan and Pashtuns live on both sides. It never made sense for us to have joined the war. When we intervened for peace in Doha talks, we were able to play a positive role,” he added.

When asked about the Taliban interim government, Imran Khan said it is the government of people of Afghanistan. “All 40 million Afghans are neither Taliban nor all are Pashtuns. The West must understand this and engage with them. The people of Afghanistan deserve peace,” he asserted. To a question about state of women education in Afghanistan. Imran Khan said Islam stresses education of women. “In KP, we too have Pashtuns who encourage girls to go to school. Parents of girls enrolling in schools receive a stipend from KP government,” he said.

To a question about his vision of an Islamic welfare state, Imran Khan responded, “I was 18 when I went to UK to study and then for 20 years, I lived and played professional cricket there. I realized there that why rule of law is important and what it means to create institutions for welfare of common citizens. In my country the powerful have always been above the law. Mafias are born when there is no rule of law and the weak and the marginal are oppressed.” “I started my spiritual journey by studying the life of Holy Prophet (PBUH) and the State of Medina he created. It was the first welfare state based on the principles of rule of law and equitable justice. This was my guiding principle when I started my movement 26 years ago,” he added.

When asked about contradictions in his own life, Imran Khan resounded that his life has been a journey of evolution. “The best part of it started when I began asking myself some fundamental questions on the very purpose of my life. My spiritual journey began when I stopped playing professional cricket. I had achieved a lot. I had earned enough to just sit back and not do anything for rest of the life,” he said. “By pondering on who I was and what I had achieved, I realised that there was a lot more I needed to do. I started with building Pakistan’s only cancer research hospital as my mother had suffered and died of the disease. That quest resulted in SKMT hospitals in Lahore and Peshawar and a third one being built in Karachi,” he continued. “To help children of marginalized segments of society, I started Namal University and then Al Qadriya. All this brought me close to people of Pakistan and I started my political journey to establish rule of law and a welfare state,” he concluded.

* PTI is the most popular political party in Pakistan

* In 2013, elections were massively rigged in PMLN’s favour

* In Pakistan, Establishment means one man – chief of army staff

* Gen (r) Bajwa did not think corruption to be an issue

* Army only institution which is still intact in Pakistan

* Last nine months have been the worst in our entire history

* Pakistan should have never joined US war on terrorism

* West must engage with Afghanistan for peace in region