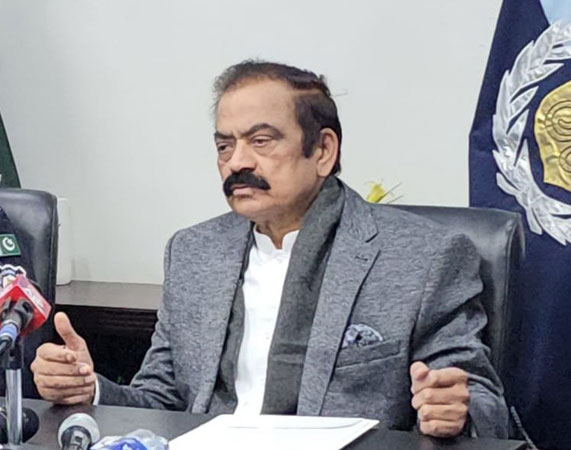 Interior Minister Rana Sanaullah on Wednesday said that efforts were underway to bring the outlawed TTP to the negotiation table but the group would first have to set aside arms and surrender before the law and the constitution.

“Pakistan needs to deal with the situation in such a manner as to keep the TTP at the lowest level and keep the number of terrorist incidents to a minimum,” the minister told a news conference in Islamabad.

“You will see the decisions that were made at NSC meeting in regards to this being implemented in the coming days,” he added. During the press conference, the minister was also asked about the remarks from the Afghan Taliban and the explicit threat issued by the TTP to the PPP and the PML-N for “openly declaring war against the TTP to appease America”. “I never said that we want to attack Afghanistan or someone there,” Sanaullah said. “However, as stated before, if any terrorist is planning to attack Pakistan or stage a terrorist attack then, as part of international law, we can and should engage,” he asserted. Regarding the threat issued by the TTP, Sanaullah said that a “general threat” was present and the government was already taking the necessary precautions. He said the NSC meeting had concretely decided that talks about any concerns or issues would only be held with the Afghan government. Sanaullah said the state’s efforts against terrorism can not be publicised as it would compromise its success. “But this should not be taken to mean that nothing is being done,” the minister said, adding that tremendous efforts against terrorism were underway and the nation should rest assured about the matter. Commenting on the recent meeting of the National Security Committee (NSC), he said that the forum had resolved to adopt a “zero tolerance” policy against terrorism with “no mixed messages and no differentiation between good or bad terrorists”. “Whoever is involved in terrorism is a terrorist,” he asserted. Sanaullah further said that authorities would take pre-emptive action against terrorist schemes and those involved would be apprehended in order to prevent such incidents from occurring in the first place.